From Bhamwiki
(Redirected from Tutwiler Hotel (1914))
Jump to: navigation, search

This article is about the original Tutwiler Hotel in use from 1914 to 1972. For the current hotel using that name, see Hampton Inn - Tutwiler 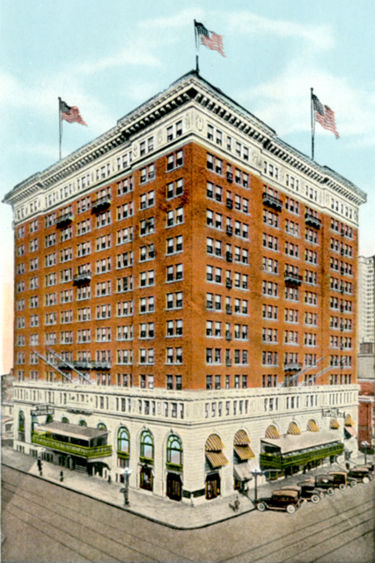 The Tutwiler Hotel was a 13-story, 425-room brick and limestone luxury hotel on the southeast corner of 5th Avenue North and 20th Street in downtown Birmingham. It was constructed in 1914 by a group of local investors. It closed in 1972 and was demolished in 1974, Another Tutwiler Hotel, named for the original, opened in 1986 in the former Ridgely Apartments.

In 1913, George Gordon Crawford, president of Tennessee Coal, Iron and Railroad Company, complained to Robert Jemison Jr that when friends and officers from U.S. Steel came into town they had no decent place to stay. Jemison soon learned that Harvey G. Woodward was hoping to sell a lot on the southeast corner of 5th Avenue North and 20th Street, a lot originally bought to prevent the construction of a new office building that would have competed with Woodward’s downtown properties. Immediately, Jemison challenged Crawford to join him in building a luxury hotel in Birmingham.

While Crawford assumed the duties of president of the new company, Jemison and W. P. G. Harding, president of the First National Bank, set out to secure the mortgage for the hotel. At Harding’s suggestion, they approached Major Edward M. Tutwiler, who had just sold his Tutwiler Coal, Coke, & Iron Company to the Birmingham Coal & Iron Company the year before, and was about to embark on a tour of South America with his wife.

Major Tutwiler tentatively agreed to underwrite the first mortgage bonds. When he returned from South America, he learned from Jemison that the option had been exercised and New York architect William Lee Stoddard was already working on plans for the new hotel in collaboration with local architect William Leslie Welton. He and hotelier Robert Meyer visited the vanguard of "metropolitan hotels" in other cities to study their best features and worst mistakes. The result blended ideas from the Slaten Hotel in Cincinnati, the Blackston Hotel in Chicago, and the Vanderbilt and McAlpin Hotels in New York City. Stoddard and Welton's design was for a large, square block with a central courtyard. The lower floors were clad in limestone and provided with large, multi-story arched windows with deep balconies centered on each street facade. A full balustrade separated this ornate base from the relatively unadorned brick walls of the residential floors above. The penthouse was again clad in limestone and crowned with a deep, ornate cornice. The interior featured what the Birmingham Age-Herald proclaimed the "Biggest Lobby in America", furnished with heavy "Elizabethan" furniture and dressed with marble walls. The main dining room was decorated in the "Adam style", while the ballroom featured decor in the manner of Louis XVI. The ground floor of the courtyard was glassed in and planted as an "orangerie".

Congratulating Jemison for their progress, he suggested that, if the other investors were agreeable, the hotel be named "The Tutwiler". They were, and construction proceeded. Jemison recruited the Wells Brothers Construction Company of New York City to oversee the building efforts.

According to one story, the building's excavation revealed an underground stream, requiring the addition of large steel beams spanning across the opening at enormous extra cost. In order to raise the entire $1.6 million needed to complete the building, the officers took out second and third mortgages - even while the specter of war was looming. The United Hotels Company of Niagara Falls agreed to lease and operate the hotel if it were completely finished out and serviced by heat and power. United spent another $400,000 furnishing the hotel before it opened. 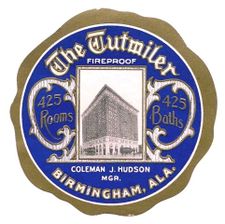 The new hotel opened its doors in June 15, 1914. Easter lilies filled the lobbies, and leading citizens turned out in formal attire to see the newly proclaimed “Grand Dame of Southern Hotels.” Promotional brochures announced that the Tutwiler “[e]mbodies every advanced thought [that] architectural ingenuity, aided by skilled labor, has so far devised… consisting of 325 rooms, equipped with bath or shower, fire alarms and telephone.” Rates ranged from $1.50 for a single room without bath to $6.00 for a double room with bath. 70 chefs were hired to staff the hotel kitchen.

For the next 60 years, The Tutwiler was a hub of Birmingham business, social, and political circles, playing host to hundreds of celebrities, politicians, and dignitaries. A reviewing stand for the largest annual Veterans Day Parade in the country was erected outside the Tutwiler. President Warren G. Harding presided over a luncheon in his honor at the hotel during Birmingham’s semicentennial in 1921. Charles Lindbergh held a 1927 press conference in its Louis XIV Suite. In 1937 actress Tallulah Bankhead threw a rousing post-wedding party in the Contintental Room, which for decades hosted lunches and dinners with live big-band music six days a week.

In 1929 United dropped the Tutwiler lease and the hotel was operated by Lewis J. Dinkler (and later by Carling Dinkler) of Atlanta as the Dinkler-Tutwiler Hotel. He marketed it alongside his other properties, the Ansley Hotel in Atlanta, the Jefferson Davis Hotel in Montgomery, and the Andrew Jackson Hotel in Nashville. Coleman Hudson stayed on as manager through 1937.

Room 212 of the Tutwiler served as the headquarters of the Southern Conference for Human Welfare (SCHW). The organization's inaugural convention, attended by First Lady Eleanor Roosevelt, was hosted there in 1938.

On July 1, 1942 the Tutwiler hosted Birmingham's $2 million War Bond Breakfast, organized by Harold Blach as a model for bond-sales programs in other cities.

In 1945 Birmingham's Realty Mortgage Company announced that it intended to buy the hotel and add a 168-room motel and swimming pool on the adjacent lot. They later withdrew the offer.

In 1948 Ira M. "Pat" Patton was manager of the hotel. In September of that year a fire started in the bedding in room 315. Buddy Lewis of Memphis, a scout for the St Louis Cardinals was taken to Jefferson Hospital to be treated for smoke inhalation and burns. Though no other rooms were damaged, four engine companies responded.

In 1951 a proposal to extend the hotel's dining room over the sidewalk was rejected. Birmingham City Commissioner Bull Connor cited a city ordinance against erecting posts on the sidewalks. In the 1950s the hotel advertised musical guests in its "beautiful piano lounge" and suggesting dining at "The Town and Country" restaurant.

The hotel was purchased by J. Henry Hoffman of Philadelphia, Pennsylvania in February 1956 for $1.25 million, but continued to operate as part of the Dinkler chain. In 1964 the hotel's lounge was dubbed The Red Garter, featuring the Jack Einhorn and Anthony duo. A smaller cocktail bar called The Jewel Box also connected to the hotel lobby. 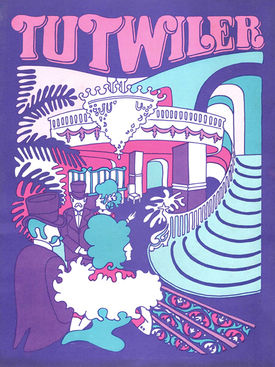 Cover of a 1968 promotional pamphlet for the Tutwiler Hotel

On June 15 1967, exactly fifty-three years after its grand opening, the Tutwiler Hotel was sold by the Birmingham-Hoffman Corporation to the local Great Southern Investment Corporation for an estimated $1.7 million.

James P. Paris, head of the investment group, announced that Great Southern would spend up to $1 million to renovate all guest rooms, banquet spaces, cocktail lounges, restaurants, and lobbies in the building. The refurbished property reopened on June 28, 1968 with Joseph Lampe, a holdover from the Dinkler Corporations, as hotel president. After remodeling, the hotel featured a total of 400 guest rooms ranging from singles to 2-bedroom suites. All rooms were provided with television sets (black & white in standard rooms, color in "superior" rooms and suites). The Tutwiler offered eight banqueting rooms capable of holding 500 guests each. Four of them could be combined into a grand ball room. Another 24 meeting rooms hosted groups of 10-40 persons.

The Regency Room ballroom, managed by Aleck Gulas, was marketed as an alternative to The Club and featured touring musical acts and comedians, open to guests with free parking and no cover. The Jewel Box and Grill Room also reopened with the hotel. 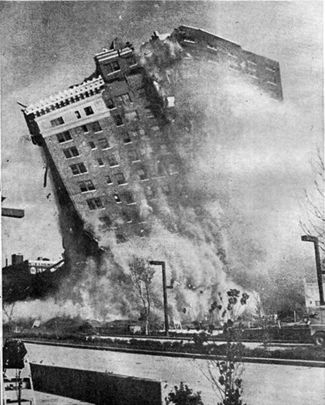 Implosion of the Tutwiler. Birmingham News photo by Ralph Farrow. 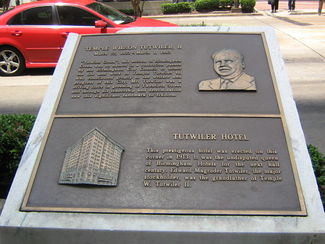 The property was purchased by the Exchange Security Bank, which was set to construct a new First Alabama Bank building there. The hotel was scheduled to be brought down by explosive charges on the morning of January 26, 1974, a Sunday. The charges, placed by the T. M. Burgin Demolition Co., succeeded in dropping the 20th Street facade, but left a large section of the south wing standing. A second series of blasts twisted that section in on itself. The company decided to complete the remainder of the demolition by conventional means. Special care was taken to prevent damage to the La Paree Restaurant, which, as Burgin described it, was "snuggled up to the Tutwiler like a puppy to its mother." The deadline for clearing the site for construction was May 17.

More than 2,000 tons of what Burgin described as "virgin" steel were removed from the site and sold to ACIPCO to make pipe. He sold the outside balcony railings to a family from Gadsden and a local contractor. He placed a 10x14 foot mirror from the main lobby at his own home in Vandiver. A leaded-glass ceiling was uncovered, hidden above two later ceilings in the hotel's barber shop. Workers salvaged more than 1,000 hardwood doors with brass knobs bearing the Tutwiler logo. Effort was made to preserve large sculpted heads from the exterior, but they were damaged later in transport.

In 1985 it was decided to convert the Ridgely Apartments building, which had also been built by Robert Jemison Jr. in 1913 and was owned by the Tutwiler family, into a new luxury hotel named after the original. In 1986 renovations of the building were completed and the new Tutwiler opened to guests.