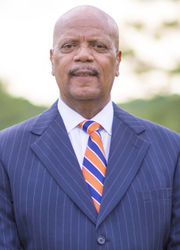 Williams graduated from Hayes High School and earned a bachelor's degree at South Carolina State University, a master's at Alabama A&M University, and a juris doctorate at Miles Law School. He began working for the school system in 1972.

Williams has served on the Jefferson County Planning and Zoning Board, the Birmingham Police Community Relations Committee, the boards for the League of Women Voters of Greater Birmingham, the Birmingham Chapter of the NAACP, and GASP, as a deacon for Tabernacle Baptist Church, and as a member the Birmingham Business Alliance and the Birmingham Retired Education Association.