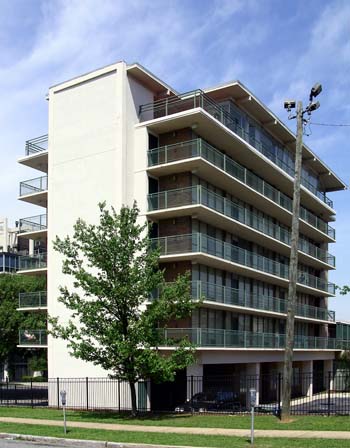 University Place Apartments is a 7-story, apartment building on the northeast corner of 18th Street South and 10th Avenue South.

The dramatically modern structure was constructed in 1960 as the 121-room Guest House Motor Inn, part of the "Master Host Inns" chain, which advertised air conditioning, direct-dial telephones, tv, radio and background music in every room and suite as well as a "large and unusually-beautiful" tiled swimming pool, a restaurant with French and American cuisine, convention facilities, free parking, baby sitting service and dancing nightly.

Decorated in a coral and blue color scheme and landscaped by Thomas M. Brooks in a "Deep South-Florida" manner, the hotel combined the services of a luxury hotel and the convenience of a motel. Holley Midgley was general manager and Emil Sevin, formerly of the Mountain Brook Country Club, was head chef and catering manager.

From 1982-1995 this was owned by UAB and operated as the University Inn. The university closed the inn in April 1995 after it was announced that the Parliament House would re-open later that year.

After its closure, it took nearly three years for its redevelopment. In 1998, Engel Realty Company began its $3.3 million transformation from a hotel into 139 apartment units. Its renovation was complete by late 1999 with the first tenants moving in by that April.