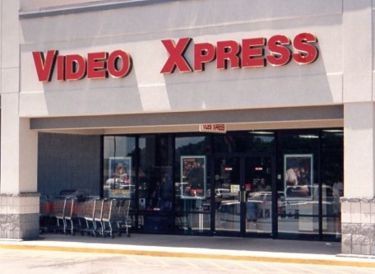 Video Xpress was a video rental store chain which was founded in Bessemer in 1983. On its shelves were 200 movies, which was every VHS tape that was on the market at that time. The chain grew to 85 locations with an inventory of over a half-million tapes when it was sold to Dothan-based rival Movie Gallery in 1994.

The founders of the chain were W.L. "Bud" and June Coleman, Bill and Kathy Coleman, Bob Coleman, and Brenda and Johnny Venz. Partnerships were formed with Floyd and Margaret Starnes and Charles and Ann Coleman to open seven stores.

Elbert and Mary Buckelew, who had been partners with Bud Coleman at Rock Mountain Lakes, a real estate development near Bessemer, opened an additional twenty-five Video Xpress stores. The Buckelews' stores operated independently from the original chain. With both factions operating under the same name, name recognition was heightened and better prices were negotiated for product.

The company quickly became the most well-known video chain in Alabama, with stores from Orange Beach on the Alabama Gulf Coast to Sheffield on the Tennessee border. The chain crept over the east and west Alabama borders with stores in Georgia and Mississippi. Two stores in Tupelo, Mississippi, and one store in Verona, Mississippi, operated under the name Video Exchange.

Video Xpress was open for business 365 days a year and some stores were open until midnight on weekends. The chain was the first in Alabama to offer free memberships.

While it did have stores in larger markets like Birmingham and Tuscaloosa, it was most successful in smaller outlying cities of Birmingham like Gardendale and Fultondale. Stores were also opened in even smaller towns that were starved for entertainment like Dora, Carbon Hill, Guin, Hamilton, Moulton, and Warrior. Three stores were located in Jasper, a city of only 12,000 at that time.

In 1993, the trade publication Video Store ranked Video Xpress as the seventh most successful video rental chain in the United States, based on growth and revenue.

The Gardendale store was located in the Village Suites shopping center at 439 Fieldstown Road in suite # 117.