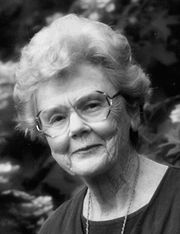 Brown, the daughter of Mary Lawson and John Lewis Pounds grew up in Birmingham and graduated from Ramsay High School. She narrowly lost the title of "wittiest" in her senior class to Miles Copeland.

Brown graduated from Randolph-Macon Woman's College in Lynchburg, Virginia in 1937. She went on to attend graduate classes at Emory University in Atlanta, Georgia, then returned to Birmingham and took a job as a library assistant at the Birmingham Public Library.

In 1941 she left to return to school, and earned her master's in library science a year later. Her first husband, John Lassiter, died at sea while serving the U.S. Navy in World War II. She became a reference librarian at Birmingham-Southern College and served as library director from 1944 to 1948. She married Torchmark accountant William Bestor Brown in 1947.

In 1950 they opened The Book-Keepers bookstore in Mountain Brook Village, selling the business in 1975. Her first published work was an article on place names in the Alabama Review in 1952. She edited and published Mary Gordon Duffee's Sketches of Alabama and re-published Ethel Armes' The Story of Coal and Iron in Alabama.

In 1962 Brown collaborated with Helen Akens on her first book, Alabama: Mounds to Missiles, a history of Alabama for young readers that was partly inspired by a request from a German visitor to her store for an easy-to-read history of the state that he could send to his family. During the writing of that book, she became interested in Alabama's native people, and published several works on that subject. Through her writings she aimed to fill gaps in the state's accessible history, including the contributions of Native Americans, African-Americans and women.

Brown was an accomplished athlete, playing tennis and golf at the Birmingham Country Club. She continued golfing until 2008, when she was 91. She died in 2014.