WENN-FM, "101.9 FM Birmingham's Neo Soul Station", is a Cox Communications-owned radio station playing a "Neo Soul" format at FM 101.9, which was not previously used in Birmingham. 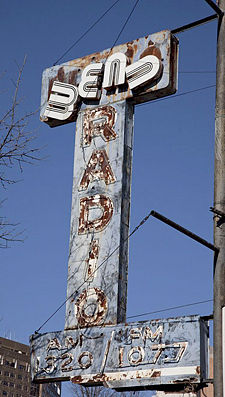 WENN-FM came on the air at FM 107.7 in 1969 as the sister station of WENN-AM and one of the first FM stations marketed to African Americans (called "Negro radio" or "Ebony radio" at the time). Both were owned by Jackson, Mississippi-based McClendon Broadcasting. Radio engineers Carl Martens and Joe Dentici got the station up and running. The station took over the soul, rhythm & blues, and gospel format while its AM sister station evolved toward more spiritual programming.

The two WENN stations were sold to an Atlanta investor after John McClendon's death. They remained successful and station manager Joe Lackey came up with a plan for the mostly-black employees to join together to buy the station. After being turned down by several banks for a loan, Lackey approached A. G. Gaston, owner of the Citizen's Federal Savings Bank and many other businesses. Gaston sent Louis J. Willie to evaluate the operation and ended up buying the station himself.

The staff joined Lackey in walking out in protest. The broadcast signal was shut down and the employees remained out of work for a few months, eking by on Lackey's own funds. Another investment group which had purchased WATV AM 900 offered the management of that station to Lackey on the condition that he not play "black music." He countered with a proposal to demonstrate the economic power of the black audience by operating the station for 90 days as a trial. The new station premiered as the top station in the market.

Gaston, adopting the BTW Broadcasting Service moniker to operate the stations, gradually brought back WENN's audience and the station remained a top contender in the Birmingham market.

The late 1980s and early 1990s brought major changes to the on-air presentation of the station. WENN began to shift from a R&B/soul-based urban contemporary to a more "mainstream urban" with the introduction of hip-hop and rap to its playlist, and moved the slower R&B and soul songs to its "quiet storm" program at night. It also adopted the station moniker and slogan 107.7 WENN, The People's Station. The station maintained a strong position in the Birmingham radio market in the top 5 in ratings throughout this time.

In 1997, a year after Gaston's death, two new competitors appeared as WBHJ and WBHK entered the market for urban and adult urban listeners. WENN's ratings and revenues plummeted and BTW chairman Kirkwood Balton put both stations on the market, selling them to Cox Radio in 1997.

In the wake of the passing of the Telecommunications Act of 1996, WENN-FM was sold to Dick Broadcasting, which already owned and operated five other stations in Birmingham: WYSF-FM, WZRR-FM, WRAX-FM, WJOX-AM, and WAPI-AM. In December 1997, Dick Broadcasting swapped WENN's stronger broadcast frequencies with the their alternative rock station, WRAX, "106 the X". At FM 105.9, WENN became known as "Rhythm 105.9". By the end of 1998, ratings had withered to the point that the station was briefly off the air.

In 1999, WENN was purchased by Capstar Broadcasting (an affiliate of Clear Channel) and came back on the air as an urban oldies station with the nickname, "Jammin' Oldies 105.9".

In January 2000, WENN switched to an urban adult contemporary format with a new name, "V-105.9". In September 2002, it again changed its name, this time to "Power 105.9", focusing even more on hip hop, rap and R&B. None of these formats worked, so it switched to gospel, "Hallelujah 105.9 FM" on February 1, 2003, copying a format Clear Channel had introduced in Memphis the previous year. Since the format change, WENN has consistently ranked in the Top 10 stations in Birmingham's Arbitron ratings.

In order to increase the station's broadcast power and improve its coverage area, WENN swapped dial positions with WRTR in Tuscaloosa, becoming "Hallelujah 105.5 FM" on September 1, 2005. The station broadcast on the FM 105.5 frequency at an effective radiated power of 29.5 kilowatts. It was licensed to Hoover and served the Birmingham market from studios at 530 Beacon Parkway West. The station was broadcast from the WJLD Tower on Red Mountain (map).

In December 2006, a few days after the demise of WRAX, Clear Channel abruptly dropped WENN's gospel format and launched a new modern rock station, known as "105.5 The Vulcan" (after Birmingham's Vulcan statue). The change was protested by a crowd of about 50 people at Kelly Ingram Park on December 9.

The program director for WENN-FM was Jimbo Wood, most recently of WRTT-FM in Huntsville. "Lex & Terry", a program originating at KDGE-FM in Dallas, Texas, was The Vulcan's morning show. The Vulcan changed its call sign to WVVB-FM on September 19, 2008. On July 6, 2009 the station announced it was dropping that format and rebroadcasting WERC-AM's talk radio programming as WERC-FM.

The present WENN FM 101.9 Neo Soul format was announced during the A.G. Gaston Conference on February 16, 2010. The Cox-owned station is once again a sibling of WENN-AM.