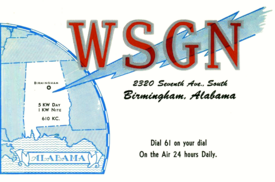 WSGN's call letters, standing for "The South's Greatest Newspaper", were adopted when the former WKBC-AM, with its studios in the Tutwiler Hotel, was sold to the Birmingham News in Spring 1934. The new owners built a secondary studio in Bessemer and transmitted on AM 1310 at 100 watts.

In June 1940 the station began broadcasting at 250 watts from a 200-foot antenna erected on the roof of the Birmingham News building. It picked up the Mutual Network, as well as several NBC Blue network programs. The general manager at the time was Henry P. Johnston.

On February 15, 1941 WSGN moved its studios to the Dixie Carlton Hotel. On March 29 of that year, the station upped its power to 1000 watts and moved its transmitter tower to the Alabama State Fairgrounds. Under the requirements of the new North American Regional Broadcasting Agreement (NARBA), the frequency was changed briefly to AM 1340, and then to AM 610. As part of its power increase, a second tower was soon erected at the fairgrounds.

In 1948 WSGN hired New York native Dick Hawley to broadcast Birmingham Barons games on its AM and FM stations. 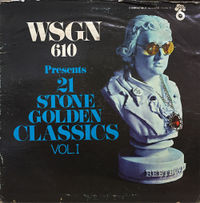 During the 1950s the station moved its studio to the Southern Life & Health Insurance building (1954) at 2318-20 7th Avenue South. It also built a "Sky Castle" studio in the parking lot of Eli's Drive-In where deejays took live requests from teenagers cruising the area. In the Summer of 1964 the station opened a new studio in the penthouse of the City Federal Building under station manager Ben McKinnon.

WSGN was soon challenged by WYDE-AM and WVOK-AM in the pop format, but both of those faded by 1965. The station was credited with helping break Bobbie Gentry's "Ode to Billy Joe" to a national audience in 1968. The next major challenge came from the new WERC-AM in 1972. The upstart station moved into the brighter "teenybopper" pop while WSGN favored harder rock, which attracted a slightly older audience. Rick Dees hosted the morning drive program from 1973 to 1974. Other 1970s personalities included Jon Anthony, John Bass, Scottie Brink, Rick Davis, Amaysa Kincaid, Steve Norris, Glen Powers, and Ronnie Todd.

By 1976 the station reversed course and tried to take WERC head on. New program director Jan Jeffries brought in Tommy Charles and John Ed Willoughby for the morning show and added deejay Kevin McCartny, a veteran of Philadelphia radio.

The station remained competitive in the Top 40 market until true FM top 40 radio came to Birmingham with WKXX-FM in 1977. By 1981 WSGN was targeting older listeners as adult-contemporary/oldies format "Music 610: The Station That Grew Up With You." The station was one of the first to adopt the "AM Stereo" format for owners Harte-Hanks Broadcasting.

In February 1984, unable to compete with WMJJ-FM, WSGN went for an even older demographic, playing big bands and adult standards. A year later the station was sold. The final broadcast ended at 12:01 AM on April 26, 1985. The last songs played were "We'll Meet Again" by Vera Lynn and "In the Mood" by Glenn Miller. The station became a simulcast partner for country-format WZZK-FM, adopting its call letters as WZZK-AM. WAPI-AM soon adopted the nostalgia/easy listening format.