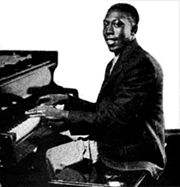 Roland was the son of Grant Roland and of Della Leatherwood. He was born in the Ralph community of Tuscaloosa County and was playing barrelhouses and juke joints in Pratt City and Birmingham by the 1920s.

At some point, Roland met William Ronald Calaway of Orlando, Florida, who encouraged him to go to New York to record. He made three trips between 1933 and 1935, recording around fifty songs under his own name for Banner Records. Among those were "Red Cross Blues" (referencing relief work during the 1927 Mississippi River flood), "Jookit Jookit", "No Good Biddie", "Piano Stomp", "Whatcha Gonna Do", "Early This Morning," and the Big Chief Ellis composition "Dice, Oh Dice." He recorded with Jackson and Scott, as well as with South Carolina-born guitarist Josh White.

By 1950 Roland had turned to farming to support himself, sometimes augmented by income from performing as a street musician in Birmingham, Dolomite, Interurban Heights, and Brighton. He lost his eyesight from a buckshot injury suffered while attempting to break up a fight between neighbors. After his second wife, Jessie, died in the late 1960s, he moved in with his daughters in Fairfield. He died from lung cancer in 1972.

In 1994, Document Records released a compilation of Roland's solo recordings.