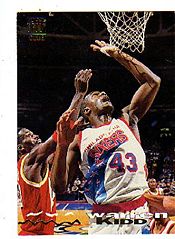 Kidd played collegiately for Middle Tennessee State University. A solid 6'9", 235 lbs center, he was never drafted by an NBA franchise but spent a season with the Philadelphia 76ers in 1993-1994.

Kidd played his best basketball in Europe with Olimpia Milano, a team based in Milan, Italy. Kidd led the 1996-1997 Euroleague in rebounds with 10.6 per game and reached the Saporta Cup final the following year.