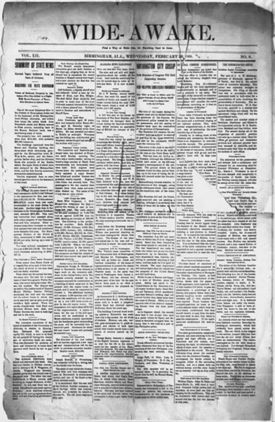 Wide-Awake (also called the Wide-Awake Bulletin or the Birmingham Wide-Awake) was a black-owned weekly newspaper published from 1888 to around 1906 (although national newspaper directories continued to list it as late as 1920). The paper's offices and press were located at 1811½ 3rd Avenue North. The company also solicited job printing work.

L. H. Harrison, who worked as a porter at the Bessemer Depot, was the editor and publisher. He went on to operate The Birmingham Blade from 1907 to 1909, and was elected as an alternate delegate to the 1916 Republican National Convention.

The Republican-leaning paper's name referred to the "Wide Awakes", a paramilitary youth movement that grew in tandem with Abraham Lincoln's 1860 presidential campaign. The paper's slogan, displayed on its masthead, was"Find a Way or Make One, for Marching Must be Done," paraphrasing a saying attributed to Hannibal before he crossed the Alps.