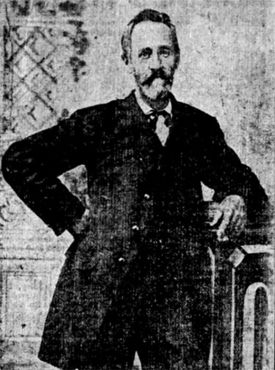 William Person Barker (born November 27, 1829 in Georgia; died May 27, 1899 in Birmingham) was a civil engineer hired by the Elyton Land Company to lay out the original plat for the newly-created City of Birmingham in March 1872.

Barker was the son of Nathaniel and Mary Gardner Barker of Muscogee County, Georgia. Barker, variously titled "Major" or "Captain", served on the first vestry of the Episcopal Church of the Advent. He built his own log cabin, later expanded into a handsome frame house, on a lot he selected at 29th Street and 10th Avenue North.

Barker married the former Elizabeth Trigg McClung on March 6, 1856 in Knoxville, Tennessee and had ten children (9 girls and 1 boy).

He died in 1899 and is buried at Oak Hill Cemetery.