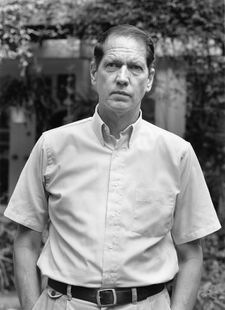 William Andrew Christenberry Jr (born November 5, 1936 in Tuscaloosa; died November 28, 2016 in Washington D.C.) was a photographer, painter and sculptor who worked with personal and mythical themes growing out of his childhood experiences in Hale County.

Christenberry was born at Druid City Hospital and was raised in Tuscaloosa, spending most of his summers with relatives in Hale County. He received his Bachelor's (1958) and Master's (1959) degrees in fine arts from the University of Alabama, studying under noted abstract expressionist Melville Price. From 1968 until his retirement in 2008 he taught at the Corcoran College of Art and Design in Washington D.C.

His artistic career began with the painting of large abstract-expressionist canvasses, but gradually he began to be drawn to material that spoke about the place of his childhood. Though he was raised in Tuscaloosa, Christenberry spent his summers with extended family in rural Hale County. After graduating from the University of Alabama and beginning a promising, if not immediately rewarding, artistic career in New York City, he came across the 1941 book Now Let Us Praise Famous Men in which James Agee describes the experience of living among the dirt-poor farming families of Hale County during the Great Depression. Some of the photographs from the book, which were taken by Agee's collaborator Walker Evans made a deep impression on Christenberry. Before leaving New York, Christenberry tracked down Evans and, with his help, found short-term work in the Time/Life photograph archives.

From 1962 to 1968 Christenberry worked alongside William Eggleston at Memphis State University and his color snapshots inspired Eggleston to begin working in color. Shortly after beginning a professorship at Corcoran College in 1968, Christenberry began making annual visits to Hale County in the summers to visit family and to explore and make photographs. Originally these were all made with a Kodak Brownie camera given to him as a child, but he later moved to a large format view camera in order to capture more detail. On one notable occasion in 1973, Walker Evans, who had encouraged Christenberry to take his photographs seriously, accompanied him. This was Evans' first and only return to Hale County since 1936.

One of the results of this annual pilgrimage was a series of remarkable photographs documenting the decay of individual structures, which were photographed as nearly isolated objects. In 1974, Christenberry began translating some of these photographed buildings into sculptures that accurately reproduced their state of decay and patina. Although very detailed and properly proportioned, Christenberry did not refer to these creations as models, as he said they were not based on precise measurements, and preferred that they be called sculptures. The bases for these sculptures were often set in soil from the actual places. On many of these trips, Christenberry collected old advertising signs and other found objects that inspired him. Some of these were incorporated into his work, while others hung in his studio. As the buildings and other remnants of his rural childhood disappeared from the landscape, he eventually stopped making visits to the area.

Another series of works was provoked by a terrifying incident when, out of curiosity, he tried to attend a meeting of the Ku Klux Klan. Confronted at the door by a glaring masked figure, Christenberry fled. Though he destroyed his first two Klan paintings, the subject occupied him for many years, resulting in a dense multi-media construction adjacent to his studio that came to be known as the Klan Room, which was mysteriously burgled in 1979. Christenberry largely reconstructed the room, which was filled with paintings, found objects, drawings, sculptures, dioramas, and a series of fabric dolls of klansmen in their hooded robes.

Known more as a photographer and multi-media artist than as a painter, Christenberry continued to teach painting. His work has been exhibited in solo and group shows around the world and is the subject of several monographs. He and his wife, Sandy, had three children.

Christenberry was diagnosed with Alzheimer's disease in 2011 and died at a nursing home in Washington D.C. in November 2016. He was buried at Tuscaloosa's Memory Hill Gardens.