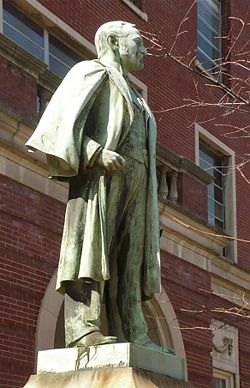 The William Elias B. Davis statue in 2010

The William Elias B. Davis statue is a bronze sculpture located at the entrance to the original Hillman Hospital on 20th Street South. The work was created by artist Giuseppe Moretti in 1904. The statue was built as a tribute to the early Birmingham doctor and surgeon William Elias B. Davis.

Following Davis' accidental death in February 1903, members of the Southern Surgical and Gynecological Association which he and his brother had founded, made plans to honor him with a portrait statue in Birmingham.

The work was commissioned from Giuseppi Moretti, then resident in Birmingham having just completed the monumental Vulcan statue and engaged in promoting the regions marble quarries. The $2,000 commission was his first after moving to the city. The 7 1/2-foot tall statue was cast in French bronze in 1904 at Moretti's Roman Bronze Works in New York, New York.

The 9 1/2-foot tall limestone plinth on which the statue rests, was given the following inscription:

WILLIAM ELIAS B. DAVIS,
SURGEON.
BORN AT TRUSSVILLE, ALA. 1863,
DIED AT BIRMINGHAM, ALA. 1903.
ERECTED BY THE SOUTHERN
SURGICAL & GYNECOLOGICAL
ASSOCIATION, WHICH HE
FOUNDED IN 1887.
SECRETARY 1887 - 1900.
PRESIDENT 1902.
---
"HE WOULD HAVE BEEN KNOWN TO THE
WORLD AS A PATRIOT HAD HE NOT BEEN
KNOWN AS SOMETHING GREATER
A PHYSICIAN." 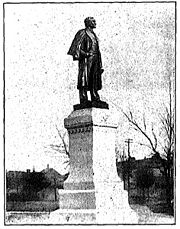 The statue was officially dedicated in Capitol Park on December 14, 1904 with over 5,000 persons in attendance. The crowd parading to the park from City Hall was led by Memoli's Band and included the delegates to the Southern Association's convention and numerous dignitaries, a detachment of the Brandon Light Artillery, and Howard College's Corps of Cadets.

Southern Association president William Haggard of Nashville, Tennessee introduced the speakers and Reverend L. S. Handley offered prayer, followed by a performance by the Birmingham High School choir. The statue was then unveiled by Davis' daughters Elizabeth and Margaret. Charles Rosser of Dallas, Texas delivered an address which extolled Davis for his pursuit of faith and duty rather than fame and glory. He made the dedication of the statue to the City of Birmingham and the State of Alabama, remarking on behalf of the Association's membership that "its foundation stone is firmly bedded in our affections and esteem".

Alderman John C. Forney accepted the statue on behalf of Mayor Mel Drennen and the City of Birmingham. Acting governor Russell Cunningham likewise accepted the honor on behalf of the State of Alabama. In his acceptance, Cunningham stated that this statue was only the second public monument to a distinguished son of Alabama. The program concluded with additional songs from the high school choir and a benediction by Reverend Hale of Southwestern University in Jackson, Tennessee.

In 1952 it was observed that the statue was beginning to tilt. A committee of the Jefferson County Medical Society arranged for it to be moved to a new site in front of the University Hospital and Hillman Clinic. A rededication ceremony was held on November 4, 1957 with remarks given by George Finney and Floyd McRae of the Southern Association. Robert Berson, vice-president of the University of Alabama Medical Center accepted the statue on behalf of the college and promised that "no tilting would be allowed on the medical college grounds." Davis' daughters once again performed the honor of unveiling the statue.

In the early 1990s the statue was temporarily moved to Davis' home town of Trussville while renovations took place at the Hospital. It was returned in the Spring of 1993. In 1998, while the hospital was being considered for demolition, a proposal was made to move the statue to Trussville permanently. The proposal was abandoned after the decision was made not to demolish the building.