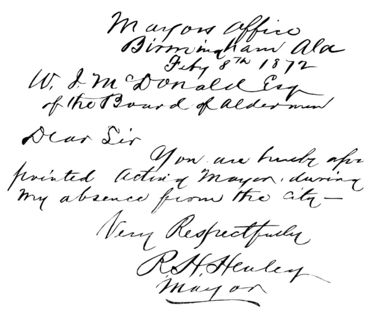 William Jackson McDonald (born November 22, 1824 in Greensboro; died August 6, 1891) was the owner of a variety store and president of the Birmingham Board of Aldermen under the administration of Robert Henley.

McDonald was the son of a Scotsman, born in Edinburgh and raised in Virginia, who moved his family to Alabama in 1812. William was born in 1824 and served in the Confederate Army during the Civil War. He was stationed at Fort Morgan in Baldwin County before being sent as a sergeant in Company I of the 5th Regiment Alabama Infantry to join the Army of Northern Virginia.

McDonald returned to Greensboro and operated a mercantile business. In 1871 he came to Jones Valley and attended the first auction of lots in the new City of Birmingham conducted by the Elyton Land Company. He purchased the second lot sold in that auction, for $200, and opened a variety store on 2nd Avenue North. He was appointed to the first Board of Aldermen. In July 1872 while Mayor Henley was out of town, he appointed McDonald to serve as acting mayor.

McDonald married the former Cynthia Ann Madison of Greensboro and had two children, Thomas, who was chief of the Birmingham Police Department from 1893 to 1898, and Bertha.