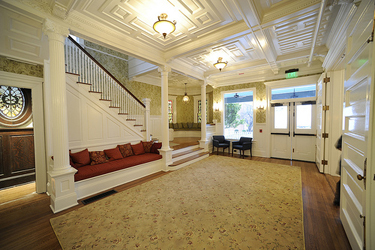 The William Robertson residence (also called the Johnson House, now ArtPlay) is a Victorian-era eclectic style wood-framed house at 1006 19th Street South. The house was built around 1896 or 1900 for William Vans Murray Robertson, general manager of the Alabama Home Building and Loan Association.

The shingle-clad volume of the main house is punctuated by barge-boarded gables, with a round turret on the corner. The steep hipped roof rests on a deep cornice. The broad front porch features a pediment supported by paired Ionic columns. The front entry, flanked by Corinthian pilasters, is through a pair of oak doors made by the E. T. Burrowes Copany. The interior features 12-foot ceilings. A massive cobalt glass and crystal chandelier, brought from Paris, graced the front hall. E. E. Forbes supplied a large mirror to enhance the effect. The dining room features a stained-glass bay window. Its chandelier was purchased from the first synagogue in New Orleans, Louisiana.

During the Great Depression, the house was opened to boarders. In 1949 it was purchased by T. Lawrence Johnson, who lived there for many years. He and his wife lived upstairs and rented three apartments on the ground floor to tenants.

In 2010 the home was purchased and renovated for ArtPlay, an arts education and outreach program operated by UAB's Alys Stephens Center. The renovations were designed by UAB Design Build Services architect Kenny Tyler.