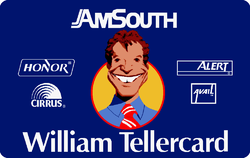 William Teller was the name for the automated teller machines (ATMs) operated by First National Bank of Birmingham beginning in 1976, and by the consolidated AmSouth Bank after 1982. The concept was created by former City National Bank of Selma president John Clark.

A cartoon character, "William Teller" (based on the likeness of actor Charles Kimbrough) appeared on the machines and in marketing materials.