From Bhamwiki
(Redirected from Winter Storm '93)
Jump to: navigation, search 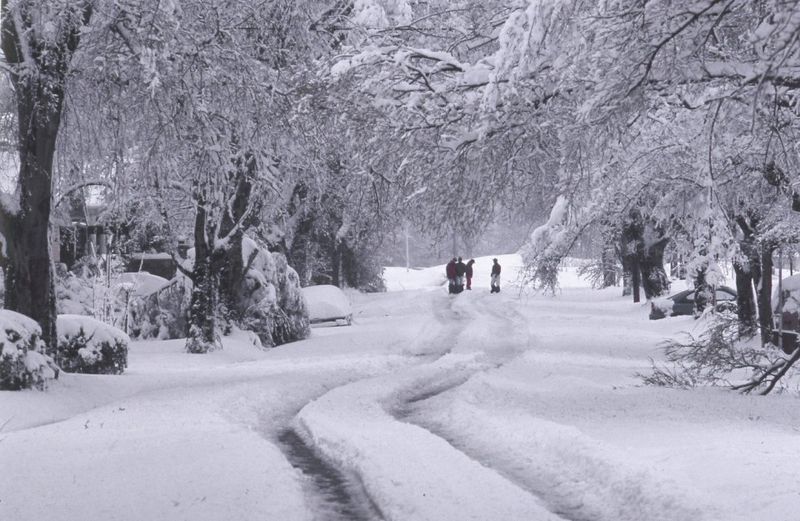 Charles Nesbitt's photograph of the snowstorm for the Birmingham News.

The Blizzard of 1993 (also known as the Storm of the Century) was a winter snowstorm affecting the entire east coast of the United States and much of Canada's on March 12-14, 1993. In addition to the 5 to 50 inches of snow dropped along its path, the storm was also responsible for hurricane-force winds in some locations. Approximately 300 people died as a result of the storm.

On March 12, Colin Powell, then Chairman of the Joint Chiefs of Staff, made an appearance in Tuscaloosa to congratulate the 1992 Alabama Crimson Tide football team on their national championship. His wife, Alma, visited friends in Birmingham during the short trip. Despite the weather, the Powells were able to fly out of Birmingham International Airport in time to return to Washington on schedule.

A live broadcast of Garrison Keillor's "A Prairie Home Companion" was staged at the Alabama Theatre on March 14. The Minnesota native made frequent reference to the unusual snowfall during the broadcast. The Birmingham Sunlights featured as guest performers on the show.

The storm caused irreparable damage to the Baby Doe's Matchless Mine restaurant on Red Mountain.

Then WBRC 6 reporter Shelia Smoot met her husband of two years, Robert Ward, Jr, when she and her crew gave him a lift home during the storm.

The official snowfall amount recorded at the Birmingham Airport was 13 inches, although parts of the metropolitan area saw as much as 17 inches. There were snowdrifts of five to six feet reported in the area. The official low was recorded as 2 degrees Fahrenheit on the morning of March 14.