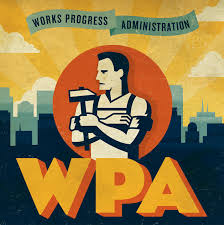 The Works Progress Administration (WPA) was a federal work relief program operated as part of the "New Deal" program to combat unemployment during the Great Depression. The program operated in Birmingham from September 1937 to May 1943 and employed as many as 9,000 people locally during its peak. It's offices were located in the Southern Club building at 500-508 20th Street North.

In April 1943 Morgan calculated the total value of the work done by the WPA under his supervision at $4,169,572.56 (more than $63 million in 2019 dollars). Most of the cost for the work was provided by the United States, with a small percentage of city funding which was offset by savings in maintenance costs and damage claims. Additional federally-funded projects, some with labor provided through the WPA, were carried out by the Housing Authority of the Birmingham District and the Federal Bureau of Roads.

Beyond marshaling labor, the WPA also provided financing for construction projects, including the 16-story Jefferson Hospital and the Graymont Armory.

Projects in the Birmingham District