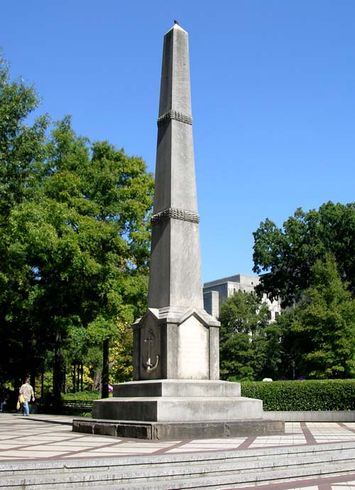 In 1894 the park, then known as Capitol Park, held no other monuments and was decorated only by towering Hudgins' fountain at its center. The cornerstone for the base for a future monument was laid during the 1894 Reunion of United Confederate Veterans in Birmingham, on April 26, a date observed as Confederate Decoration Day, the anniversary of General Joseph Johnston's surrender to Union General William Sherman at Bennett Place, North Carolina in 1865. It was designed by architect Charles Wheelock and constructed by Joseph Meighan of Oak Hill Marble and Stone Works. The $1,020 cost was raised in four days by a campaign publicized in the Birmingham News. The cornerstone includes a sealed box containing a Bible, a Confederate flag, a bronze medal honoring the Declaration of Independence, several newspapers and lists of Confederate organizations. News publisher Rufus Rhodes introduced UCV Commander-in-Chief Stephen D. Lee, the featured speaker at the ceremony.

Over the next few years, the plinth remained empty. After the Spanish-American War concluded in August 1898 the city installed a surplus artillery piece from the conflict on top of it. In 1900, at the behest of Jennie Rountree, Birmingham's John Pelham Chapter of the United Daughters of the Confederacy, organized in 1896, took up the challenge of completing the Confederate monument. Mrs A. A. Clisby, president of the chapter, appointed Mary Scott Taliaferro, Mrs J. U. Hardeman, Mrs R. H. Carter, and Mrs Charles G. Brown to a committee to raise funds. The committee organized a week-long bazaar in the City Market on the ground floor of Birmingham City Hall. Clisby's successors carried the torch and made annual appeals for funds through the Birmingham News.

Brown then presented the monument to the State of Alabama and to the City of Birmingham. Lieutenant Governor Russell Cunningham and Mayor Mel Drennen then graciously accepted the gift with speeches of their own. General George P. Harrison, Commander of the United Confederate Veterans of Alabama, gave the concluding address to rounds of raucous applause punctuated by the "rebel yell" from fellow veterans. After the conclusion of the ceremony, the crowd processed up to Oak Hill Cemetery to decorate the graves of 45 Confederate dead.

The statue was significantly damaged and defaced with hand tools, power tools, and spray paint during riots on the night of May 31, 2020, coinciding with national protests in response to the death of George Floyd at the hands of police in Minneapolis, Minnesota. Attempts to topple the obelisk were unsuccessful. Mayor Randall Woodfin told the crowd that he would finish the job they started within 24 hours. Other monuments in the park were also damaged before police cleared the park shortly after 10:00 PM. The city enforced a curfew the following night.

The next day, Monday June 1, coincidentally a state holiday honoring Jefferson Davis, Marshall issued a statement affirming that he would file suit under the state law in pursuit of a fine, which he clarified was, "a one-time assessment of $25,000." That evening, during a citywide emergency curfew, the monument was removed from the park. Woodfin said that the cost to the city for the work of removing it was $1, but did not identify the contractor due to fears of backlash. A Gofundme campaign was launched by White Clergy for Black Lives Matter to reimburse any costs and potential state penalties for removing the monument. The campaign received more than $50,000 in six hours. Organizers pledged to forward donations above that amount to Faith in Action Alabama to help eliminate systemic racism in the state.

The city does not intend to destroy the monument, and is storing it at an undisclosed location until a determination is made about where it should go. The Mayor's office has made attempts to contact the Sons of Confederate Veterans and the United Daughters of the Confederacy, as well as other organizations, about taking possession of the monument, but no agreement has been reached. Any artifacts recovered from the monument will also be preserved.