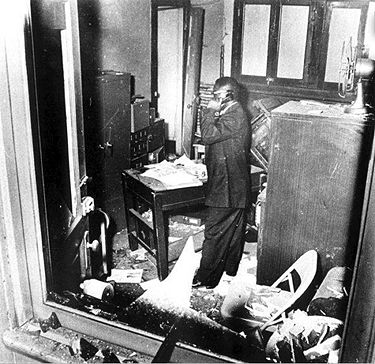 A damaged office in the church, courtesy BPL Archives

The 1963 church bombing was a racially motivated terrorist attack on the 16th Street Baptist Church on Sunday September 15, 1963. It took place less than a week after President John F. Kennedy placed the Alabama National Guard under federal command in order to secure the court-ordered integration of public schools in Birmingham, Mobile and Tuskegee. The crisis over school desegregation had consumed the city since the beginning of the school year, with four bombings in the four weeks preceding. A total of 21 unsolved bombings over 8 years had already given the city the derisive nickname, "Bombingham."

The three-story 16th Street Baptist Church near Kelly Ingram Park, while not the most inflammatory congregation, had served as a rallying point for many civil rights activities, especially during the Birmingham campaign. Members suspected that the building would be targeted by the Klan. Telephoned threats had been received since May, following April's mass demonstrations. A warning the week before the bombing prompted four members to stand guard outside during evening services. On the day of the bombing there was no warning. A church secretary reported that the phone rang many times, but no one was on the line.

The deadly church bombing proved to be a turning point of the Civil Rights Movement of the 1960s, provoking horror and outrage that expanded the national campaign to correct injustices. Many consider the event to have provided the impetus for passage of the Civil Rights Act of 1964.

Around 2:00 AM on Sunday, September 15, 1963, Ku Klux Klan member Bobby Frank Cherry planted 19 sticks of dynamite under the east side stairs adjacent to the basement wall of the Church. He was likely accompanied by "Dynamite Bob" Chambliss and Troy Ingram and driven to the west end of the alley bisecting Block 43 by Tommy Blanton. All four were members of the Cahaba River Group of extremists that split off from the Eastview 13 Klavern (United Klans of America) in Woodlawn.

After 10:00 AM, three girls left their Sunday School classes early and gathered with two others in the basement lounge adjoining the bomb emplacement in order to primp for their role as ushers for the church's "Youth Day" service. At approximately 10:22 AM members heard a distinct "click", followed by a massive explosion which collapsed part of the wall and main floor, killing four of the girls: Addie Mae Collins (14), Carole Robertson (14), Cynthia Wesley (14) and Denise McNair (11). Twenty-two other church members were injured, including Sarah Collins, Addie Mae's older sister.

The explosion blew a large hole in the church's side wall, and destroyed the steps. All but one of the stained glass windows were completely shattered. The surviving panel depicted Christ surrounded by children. In that window, only the face of Christ was damaged. Five cars near the church sustained heavy damage, with two of them destroyed. Windows in the laundry across the street were blown out in the blast.

It is not for sure known whether the bomb was timed to go off during services, or if the timed detonator failed. Carolyn McKinstry, who was 15 at the time, has said that she answered one of the calls to the church office and heard a man say "three minutes." She hung up and took fifteen steps before the blast. None of the suspects expressed regret at the deadly result of the blast. 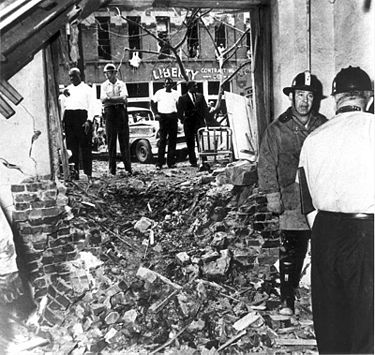 Firemen at the scene of the bombing, courtesy BPL Archives

Immediately after the explosion, thousands of people rushed toward the church. Pastor John H. Cross urged people to leave the scene. Many remarked on the swiftness with which police arrived on the scene. Unable to disperse the "hysterical" crowd, the police fired rifles into the air. The crowd was eventually dispersed approximately two hours after the bomb went off.

After receiving a request from Mayor Albert Boutwell and Police Chief Jamie Moore, Governor George C. Wallace sent 300 Alabama State Troopers to Birmingham to help restore order. Another 500 "non-Federalized" National Guardsmen were ordered to stand by at area armories. The remainder of the day was marked with sporadic outbursts of violence. The Birmingham City Council held an emergency meeting, but did not order a general curfew.

Two more black youths were killed that day. Johnnie Robinson (16) was shot by police after throwing stones at moving cars. Virgil Ware (13), on a bicycle, was shot by a white man on a motor scooter. Police exchanged shots with a black man armed with a shotgun near the church. Two white men reported being injured by blacks, one during an attempted robbery.

At least five fires were reported in black-owned businesses during the day. A rally by white students protesting school integration was broken up by police, as was a motorcade of adult segregationists on their way to join them. 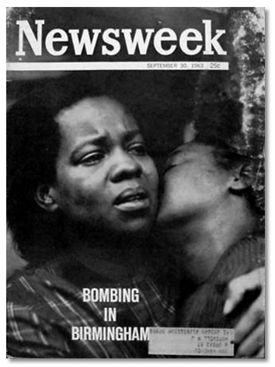 Newsweek's September 30, 1963 edition with a photo of Juanita Jones and Maxine McNair taken by John Friedel on the cover

Martin Luther King arrived on the evening of the bombing to meet with Fred Shuttlesworth. Before leaving Atlanta, he sent a telegram to President Kennedy, who was yachting in Rhode Island. He indicated that he would try to encourage non-violence on the part of Birmingham's blacks, but that he feared a "racial holocaust" in Birmingham if "immediate Federal steps" were not taken. Attorney General Robert Kennedy sent Burke Marshall and 25 FBI agents, including bomb experts from Washington, to assist with the investigation. King's message to Governor Wallace stated that "the blood of four little children [...] is on your hands. Your irresponsible and misguided actions have created in Birmingham and Alabama the atmosphere that has induced continued violence and now murder."

Birmingham Police detained two men for questioning on the day of the bombing, but later released them. Inspector W. J. Haley estimated that at least 15 sticks of dynamite were used in the blast. Witnesses reported seeing a passing car speed away from the scene just before the blast, but were unable to identify the occupants. The city offered a $52,000 reward for the arrest of the bombers. Governor Wallace added $5,000 to the amount.

A funeral for three of the four victims1 at Sixth Avenue Baptist Church on Southside, was attended by over 8,000 mourners, white and black, but no city officials. On the Sunday following the bombing, 13,000 people, including Chris McNair and his wife, attended ceremonies in New York City at which Hames Baldwin called on Americans to refrain from Christmas shopping until the nation "earns the right to celebrate the birth of Christ.". New York Mayor Robert Wagner proclaimed the day an official "day of sympathy, respect and determination to speed the day of equal opportunity for all." Another 10,000 gathered across from the White House in Washington D.C. to commemorate the deaths of the six youth killed in Birmingham. A national "America's Conscience Fund", co-chaired by California Governor Edmund Brown and Cincinnati Mayor Charles Taft was established to raise money to repair 16th Street Baptist and other churches damaged by racially-motivated bombings. Meanwhile, a scheduled appearance by George Wallace at Yale University was cancelled. 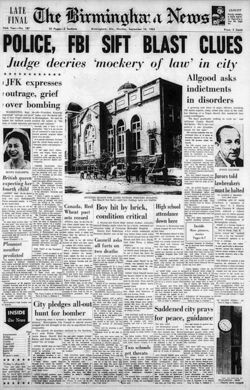 The local police effort characteristically adopted a defensive stance. Birmingham police first investigated the background of the victims–to determine if they had been active in the movement and thus not entirely innocent. The church custodian, an African American was questioned as a suspect. Three days after the tragedy, former Birmingham police commissioner Eugene (Bull) Connor addressed a crowd of 2,500 people at a Citizen's Council meeting saying, "If you're going to blame anyone for getting those children killed in Birmingham, it's your Supreme Court." Connor recalled that in 1954, after the Brown vs. Board of Education decision had been reached, he had said, "You're going to have bloodshed, and it's on them (the Court), not us." He also proposed that African-Americans may have set the bomb deliberately to provoke an emotional response, saying, "I wouldn't say it's above King's crowd."

The initial investigation was retarded by not only by uncooperative local officials, but also by a compromised Federal Bureau of Investigation. An FBI informant named singer Harry Belafonte as the organizer of the crime. Chambliss, who had not gone to great pains to disavow his role in the attack, was ultimately charged, but was acquitted for lack of evidence.

Years later it was found that the FBI had accumulated evidence against the bombers, but by order of director J. Edgar Hoover, had not disclosed the evidence to prosecutors. In 1977, new charges were brought by Alabama Attorney-General Bill Baxley and Chambliss was finally convicted for the murders and sentenced to several terms of life imprisonment. He died in prison in 1985.

After reopening the case several times, in 2000 the FBI assisted the state authorities in bringing charges against Cherry and Thomas Blanton. Blanton and Cherry were convicted by state court juries and sentenced to life in prison. Cherry, who always denied his involvement, died on November 18, 2004.

The song "Birmingham Sunday", composed by Richard Farina and recorded by Joan Baez, chronicled the events and aftermath of the bombing.

4 Little Girls, Spike Lee's 1997 documentary about the bombing, was nominated for an Academy Award for "Best Documentary". A memorial sculpture to the victims of the bombing was commissioned from Elizabeth MacQueen for placement in Kelly Ingram Park on the 50th anniversary of the bombing.