From Bhamwiki
(Redirected from 2600 Highland Avenue)
Jump to: navigation, search

2600 Highland is a 41-unit, 11-story condominium tower at the corner of Highland Avenue and Niazuma Avenue in the Highland Park neighborhood of Birmingham. 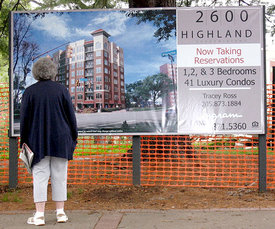 The project was developed by a partnership operating as 2600 Highland LLC. Partners included Ingram Tynes, Phil Mulkey, and Scott Hinkle. The design is principally the work of SGN+A Architects of Atlanta with input from Krumdieck Design and the Garrison Barett Group. Golden Construction was the general contractor. At $19 million, this was their largest project to date.

The project was built on the former site of the Otto Marx residence, a historic mansion which had been converted for use as the Mary Lewis Convalescent Center. Hinkle purchased the property from UAB in 2003 for $820,000. Based on the architectural renderings and plans - which incorporated stylistic references to the design of the Marx residence, permission to proceed with demolition was granted by the Birmingham Design Review Committee on March 1, 2005.

The design creates an 11-story wall along Highland and Niazuma with a grand lobby accessed from a raised terrace at the corner. A spa and fitness center are located adjacent to the lobby on the ground floor. A 3-story parking deck occupies the rear of the site with a garden terrace and salt-water swimming pool.

After a year of no visible progress following the demolition of the Marx residence, construction began on September 21, 2006. At that time, approximately one third of the units were reported to have been reserved.