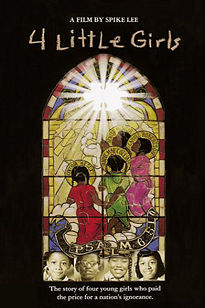 4 Little Girls is a 1997 documentary directed by Spike Lee about the 1963 bombing of 16th Street Baptist Church. In particular, it covers the lives, deaths, and effects on the families of the four girls killed in the bombing: Addie Mae Collins, Carole Robertson, Cynthia Wesley, and Denise McNair. Lee has said that the film was a topic he'd wanted to cover ever since he first attended film school.

The film features portions of interviews with many relatives, friends, and associates of the girls as well as some of the politicians and civil rights activists involved in 1963. It also includes archival footage from the bombing's aftermath and news reports. Perhaps the most shocking footage, however, are the brief shots of the girls' autopsy photos.

The film premiered on June 25, 1997 at the Guild 50th Street Theatre in New York. Its Birmingham premiere took place at the Alabama Theatre on September 13 of the same year. The audience for the invitation-only event, which included many of the girls' family members, was estimated at 2,000 people. Spike Lee was in attendance and addressed the audience before the film started, saying "I'm a little anxious how it's going to be received here." At the end, the film received a standing ovation.

The day after the premiere, state officials announced that prosecution of bombing suspects Thomas Blanton and Bobby Frank Cherry was imminent. Both were later convicted.