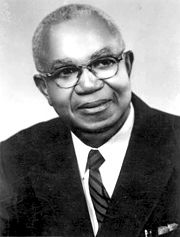 Arthur George Gaston (born July 4, 1892 in Demopolis, Marengo County; died January 19, 1996 in Birmingham) was an African-American entrepreneur who established a number of businesses in Birmingham, catering primarily to black customers under the city's ingrained segregation. Though not a vocal supporter of the Alabama Christian Movement for Human Rights, he did provide support to the movement and played a significant role in the struggle to integrate Birmingham in the 1950s and 60s. 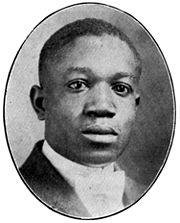 Gaston was born to Tom and Rosa McDonald Gaston in Demopolis, but grew up in the home of his grandparents, Joe and Idella Gaston. He moved to Birmingham as a boy in 1905 when his mother, the cook for the Loveman family, was brought to the city. He was educated at the private Tuggle Institute in Enon Ridge.

Gaston served in the army in France in World War I, then went to work in the mines run by Tennessee Coal & Iron Co. in Fairfield. He hit on the plan of selling lunches to his fellow miners, then branched into loaning money to them at twenty-five percent interest. While still working at the mine he began offering burial insurance to co-workers and to the community at large though the Booker T. Washington Burial Society. In the 1920s, as part of a deal for the hand of his first wife, Creola, he partnered with his father-in-law A. L. "Dad" Smith to establish the mortuary firm of Smith & Gaston Funeral Home. 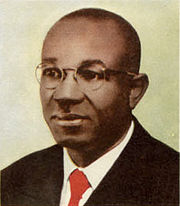 Driven out of Fairfield because of Smith's political differences with the mayor, he bought property on the edge of Kelly Ingram Park in downtown Birmingham, where he moved the Smith & Gaston business, in 1938. After Creola died, he remarried (and again accepted help from his new father-in-law to keep his funeral home open). His second wife, Minnie supported her husband's business interests by founding and operating the Booker T. Washington Business College to train clerical workers. The college itself was not financially successful, as Mrs Gaston forgave many students their tuition debts, but it did provide training to many employees who staffed Gaston's other businesses.

Gaston extended his business holdings throughout the neighborhood and beyond, opening a savings and loan in the early 1950s, the first black-owned financial institution in Birmingham in more than forty years. Smith & Gaston sponsored gospel music programs on local radio stations and launched a quartet of its own. In 1954 Gaston built the A. G. Gaston Motel on the site adjoining Kelly Ingram park where the mortuary had once stood.

While his second wife, Minnie, was a founder of the National Council of Negro Women and her father had been an active supporter of voting rights in Lowndes County, Gaston himself had kept a low political profile through most of the 1940s and 1950s. He offered financial support to Autherine Lucy, who had sued to integrate the University of Alabama, and had provided financial assistance to residents of Tuskegee who faced foreclosure because of their role in a boycott of white-owned businesses to protest their disenfranchisement. When Rev. Fred Shuttlesworth founded the Alabama Christian Movement for Human Rights in the wake of the outlawing of the NAACP in the State of Alabama in 1956, the group held its first meeting at Smith & Gaston's offices.

Gaston was far more reluctant to confront white authorities and the white business establishment directly. When students at Miles College, a historically black college in Fairfield, attempted to use sit-ins and boycotts to desegregate downtown Birmingham in 1962, Gaston used his position as a member of the board of trustees of the institution to dissuade them from continuing their campaign while he pursued negotiations with merchants. Those negotiations produced some token changes, but no significant progress toward desegregating the stores or hiring black employees, which remained illegal under Birmingham's segregation ordinances, which were lustily enforced by Bull Connor.

When the Southern Christian Leadership Conference, represented locally by Shuttlesworth, proposed to support those students' demands in 1963 with widespread demonstrations, challenging both Birmingham's segregation laws and Connor's authority, Gaston opposed the plan and tried to deflect the campaign from public confrontation into negotiations with white business leaders.

Gaston tried to talk Martin Luther King Jr out of going through with the planned Easter boycott of downtown business. In one interview, Gaston said that what black people needed was, "a Martin Luther King of economics who will fire the people up like they are being fired up for civil rights." He added that, "It doesn't do any good to arrive at first-class citizenship if you arrive broke."

At the same time, Gaston provided King and Rev. Ralph Abernathy with rooms at his motel at a discount and free meeting rooms at his offices nearby throughout the campaign. He maintained a public show of support for the campaign and not only took part in the meetings with local business leaders, but also insisted that Shuttlesworth be brought in since "he's the man with the marbles".

That unity nearly dissolved, however, after Abernathy made some comments about unidentified "Uncle Toms" and Dr King made it clear that he would press forward with his plans for confrontation. Gaston issued a press release in response in which he obliquely criticized King by lamenting the lack of communication between white business leaders and "local colored leadership".

That press release exposed a significant rift between the activists in the movement. Shuttlesworth described Gaston as a "super Uncle Tom" to the press while complaining that he overcharged for his motel rooms. The leaders of the movement were eager, however, to avoid any public airing of those differences; Shuttlesworth soon apologized, SCLC leaders treated the press release as an expression of support for their campaign while Dr King announced creation of a special committee of local leaders, including Gaston, to meet every morning to approve each day's plans.

That committee had no real power, however, as became clear when the movement encouraged school children to march against segregation on May 2, 1963. Gaston protested the strategy, telling King "Let those kids stay in school. They don't know nothing." King replied, "Brother Gaston, let those people go into the streets where they'll learn something." The demonstrations continued. Days later, Gaston wrote a personal check for $5,000 to bail King and Abernathy out of jail after their arrest for parading without a permit.

Unknown persons attempted to blow up the part of the Gaston Motel where King and Abernathy were staying on May 12, 1963. Later that day Alabama State Police dispatched to clear Kelly Ingram Park invaded the motel, clubbing those who could not escape. In the aftermath of the campaign, Gaston remained disaffected from Dr King, urging him in September 1963 not to follow through on a planned return to demonstrations in Birmingham. Earlier that same month, unidentified persons threw firebombs at Gaston's house, a day after he and his wife had returned home from a state dinner at the White House with President Kennedy.

In 1976 Gaston was approached by WENN general manager Joe Lackey about a loan that would allow the station's mostly black staff to join with him to purchase it from its out-of-town owners. Instead, Gaston bought the station himself, triggering a walkout by the on-air staff. Gaston's BTW Broadcasting Service recovered and became a leading voice in the black community.

Just after midnight on the morning of January 24, 1976 Gaston and his wife were assaulted and Gaston was abducted from his home. He was struck in the head with a hammer, handcuffed and forced into the back seat of his own 1972 Cadillac El Dorado under a blanket. Minnie was also struck and suffered a dislocated shoulder. She was bound and left at the house, but regained consciousness and alerted the funeral home, which in turn contacted police.

Gaston's abductor made several stops, saying that, "It's my job to deliver you," but was apparently unable to meet his contact. Gaston's car was located within hours on Alabama State Highway 79 with Gaston still inside. The driver, Charles Lewis Clayborn Jr of Davin, West Virginia, was taken into custody. The Gastons were treated at Baptist Medical Center Montclair.

Clayborn was convicted of kidnapping, robbery, burglary and two counts of assault with intent to murder. He was sentenced to life in prison at the Jefferson County Jail. No accomplices were identified during the investigation. Minnie, in particular, remained haunted by the brutal attack and arranged for guards to patrol the couple's home for a while afterward. Gaston later installed an electronic security system at Robin Wood.

In his later years Gaston began turning over more of his business to subordinates and he and his wife spent more time away from Birmingham at their condominium in Fort Myers, Florida.

Gaston died at age 103 while undergoing treatment for illness at Medical Center East in January 1996. He left behind three companies, the Booker T. Washington Insurance Company, A. G. Gaston Construction, and CFS Bancshares. Gaston's net worth was estimated to be more than $130,000,000 at the time of his death.

The City of Birmingham owns the motel, which it plans to make into an annex to the Civil Rights Institute, which was built on the site of the old insurance building.

Birmingham City Schools' former A. G. Gaston School in Roosevelt City was named for Gaston. It closed in 2011.