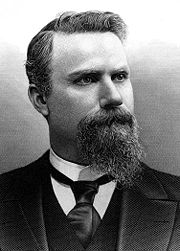 Lane decided not to run In 1888, but was convinced to put his name in for the 1890 election, which he again won. At the end of that two-year term he served as a delegate to the Democratic National Convention and was appointed an Associate Justice for the 10th Judicial Circuit of Alabama by Governor B. B. Comer. He was subsequently re-elected to that position twice before resigning so that he could take a seat on the newly-formed Birmingham Board of Commissioners in 1911.