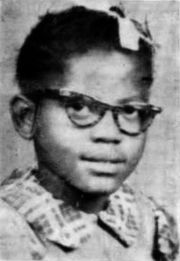 Addie Mae Collins (born April 18, 1949; died September 15, 1963 in Birmingham) was one of the four girls killed in the 1963 bombing of 16th Street Baptist Church. She was 7th of 8 children born to janitor Oscar Collins and his wife, Alice who lived on 6th Court West.

Collins was buried in Greenwood Cemetery along with fellow victims Carole Robertson and Cynthia Wesley. The grave was marked by a wooden plaque until 1990 when a marble headstone was donated by Ken Mullinax. In January 1998, Collin's sister Sarah made preparations to relocate her remains to a mausoleum at Elmwood Cemetery, but none were found in the marked plot. Collins' family filed suit against Poole Funeral Home, which operated the cemetery at the time, but the case was dismissed in 2003.