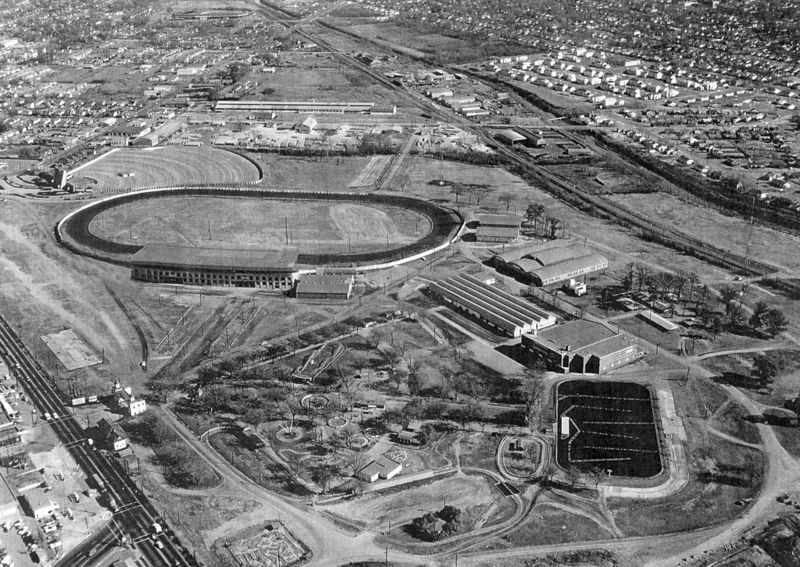 Aerial view of the Alabama State Fairgrounds from the west.

The Alabama State Fairgrounds was a 117-acre exhibition grounds and recreational park located in Birmingham's Central Park neighborhood, adjacent to the Five Points West shopping area. It was on the site of the present Birmingham CrossPlex and CrossPlex Village mixed use development. 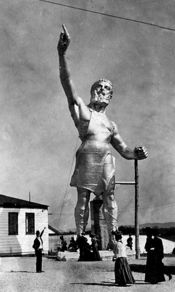 Birmingham International Raceway was located inside the gates of the Fairgrounds. The State Fair Arena and Exposition Building covered a combined total of 110,000 square feet.

The 1889 Alabama State Fair in October 1889 was the first to be held at the fairgrounds site. The first grandstand and exhibition buildings were erected that summer.

For many years, the grounds were home to the Alabama State Fair. The statue of Vulcan, which is now a Birmingham landmark atop Red Mountain, was displayed at the Fairgrounds after it was brought home from the 1904 St. Louis World's Fair. Business executive Robert "Buster" Brown president over the fairgrounds as president of the Alabama State Fair & Exhibit Association from 1914 until his death in 1936.

The fairgrounds was purchased by the City of Birmingham for $290,000 in 1946 and placed under the administration of a six-member Alabama State Fair Authority, appointed by the Birmingham City Commission. Because the city provided no funding to the authority, which was expected to finance park operations and maintenance from the income generated from auto races and special events. To boost those revenues, the Authority invested in development of the permanent "Kiddieland" amusement park, and also leased a portion of the ground for the Fair Park Drive-In cinema.

The city supplemented the authority's re-investment of budget surpluses with bond funds for the construction of a new Industrial Arts Building and Agricultural Building and cattle barn. In the 1950s a Fair Park Pool was constructed, with a wide beach of Gulf Coast sand and huge floodlights to allow for night swimming.

During the Birmingham Campaign of 1963, the Fairgrounds, which had been closed to the public to avoid court ordered desegregation, were used by the Birmingham Police Department to hold arrested demonstrators after the city's jails were filled.

In later years the raceway continued to host high school football games and the arena supported several semi-professional basketball teams, as well as flea markets and other events. The parking lot had a capacity of 7,500 cars. The Kiddieland section of the park continued to operate but slid into a dilapidated state by the late 1980s. A go-kart track and batting cages remained on the premises, but were largely inactive by the mid-1990s. Fairgrounds manager Tom Drilias resigned in 1999.

The state fair discontinued regular use of the facility because of poor attendance and high crime in the adjacent neighborhood. The Alabama State Fair Authority went bankrupt, and was dissolved sometime around the year 2001. No state fair has been held on a regular basis since. (The "Alabama National Fair" in Montgomery and another carnival called the "Alabama State Fair" in Pelham, are unrelated.)

The raceway grandstands in January 2009

A feature of the fairgrounds was the Birmingham International Raceway which originated as a 1-mile clay oval horse track in 1906. An 8,000-seat grandstand was constructed in 1925 and the track, later reduced to 5/8ths of a mile, has hosted innumerable automobile races, as well as harness races, concerts, shows and football games. The grandstands were demolished in 2009 as part of the redevelopment of Fair Park.

The W. F. "Bill" Harris State Fair Arena is a 6,000-seat multipurpose indoor arena located at the Fairgrounds. The arena is used primarily for basketball, but also hosts concerts and other events.

The St Louis & San Francisco Railway's Engine No. 4018, a steam locomotive, went on display under a metal shed soon after it retired from service in 1952. It was relocated to Sloss Furnaces in 2009.

In 1969 the Authority proposed a Fair Park East on a 630-acre site near Jefferson State Junior College in Eastern Jefferson County.

Shortly after taking office in November 2007 Birmingham Mayor Larry Langford proposed a large-scale redevelopment of Fair Park which would combine athletic facilities with residential, retail and entertainment facilities. The centerpiece of the redevelopment would be indoor track and swimming facilities. On April 8, 2008 the Birmingham City Council approved the use of $48 million in city funds to initiate construction.

On June 19, 2008, Langford proposed moving the race track to a site in northwest Birmingham off of Daniel Payne Drive, stating that it didn't fit into Fair Park's redevelopment plan. Demolition of the grandstand began on January 31, 2009.

An August 2009 proposal from Fair Park Real Estate Partners to develop 10 acres of the park as a retail center anchored by CVS Pharmacy and Aldi was tabled by the Council's Administration, Budget and Finance Committee until the developers could produce a comprehensive plan for the site.

Redevelopment of adjoining property for mixed retail, entertainment and residential uses has been discussed since the beginning of the CrossPlex development. After several false starts, the city contracted with Bob Nesbitt (acting as the Urban Community Development Consortium) in February 2016 to head the development of a 31-acre parcel under a long-term lease agreement. The project opened in the Summer of 2017.