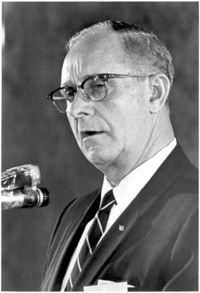 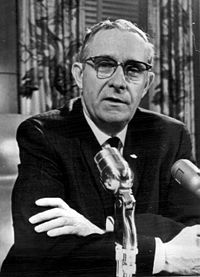 Albert Burton Boutwell (born November 13, 1904 in Montgomery; died February 3, 1978) was the nineteenth lieutenant governor of Alabama and the 22nd Mayor of Birmingham, serving from 1963 to 1967.

Boutwell graduated from Greenville High School and then from the University of Alabama School of Law with a bachelor of law degree in 1928. While attending university, Boutwell shared a room with Abe Berkowitz. He was a member of the Sigma Delta Kappa law fraternity and the Alpha Phi Epsilon honorary forensic fraternity. In his graduating year, Boutwell was also the Student Government Association President.

Boutwell moved to Birmingham immediately after graduating to practice law. He married the former Helen Balfour Drake of Birmingham on November 23, 1934. In 1946 her entered into a partnership with Sam Pointer Sr. A year later, as partner in Boutwell, Pointer & Hawkins, he was admitted to practice in the United States Supreme Court.

Boutwell was elected to the Alabama Senate that year, and was re-elected for a second term, during which he served as the president pro-tem. While in the Senate, Boutwell, as Chair of the Interim Legislative Committee on Segregation in the Public Schools, co-authored Alabama's Pupil Placement Law, which strengthened racial segregation in public schools. At the end of his third term, Boutwell was elected Lieutenant Governor, serving under John Patterson from 1959 to 1963.

Boutwell's election as Mayor of Birmingham came at a crucial time at the height of conflict in the Civil Rights Movement. The election of a new mayor and council, in place of the three-member City Commission, was an achievement of David Vann and the Young Men's Business Association, which plotted to change the city's form of government mainly as a way of removing Commissioner of Public Safety Bull Connor, a belligerent and outspoken racist, from power.

There was hope among moderates and the business community that the prospect of Connor's political defeat would open the door to peaceful compromise with Civil Rights movement leaders. Fred Shuttlesworth and Martin Luther King, Jr, however, determined to move forward with their protests regardless of the outcome. With Boutwell in office, they predicted, the rhetoric would be gentler, but the status quo would not change.

When Boutwell won the April 2 runoff, the Birmingham News spoke for the many moderates on the sidelines with the headline "New Day Dawns for Birmingham". The new day did not bring accord, however, as large-scale Civil Rights protests continued and the sitting commission refused to leave office, saying that their terms would not be up until 1965 and that the institution of a new form of government was not enough to remove them from their elected positions. For the next few weeks, Birmingham had two governments claiming power.

Despite public calls for patience and unity made by white clergymen and some black leaders, the movement increased its activities in the week leading up to Good Friday, when King marched into the hands of Connor's police and submitted to arrest. King's previous campaign in Albany, Georgia, had made little impression in the national press because of the ready capitulation by that city's leaders. Shuttlesworth knew that as long as Connor was in power, the movement would be able to provoke a response that would put a spotlight on the growing conflict of conscience.

Within the space of a few weeks King completed his "Letter from Birmingham Jail", Connor unleashed dogs and fire hoses on child protesters in front of TV cameras at Kelly Ingram Park, and Boutwell took on the mantle of mayor with the court's blessing.

A few months later Birmingham City Schools were forced to integrate by federalized National Guard troops and the terrorist bombing of 16th Street Baptist Church killed four girls. Boutwell's term of office began on the city's darkest hour and only a few rays of a new dawn were visible when he was succeeded by George Seibels in 1967. Boutwell himself observed, in a speech late in his tenure, that, "Today I saw smiles on faces which once showed sorrow. I saw hope where once I saw despair. And I saw confidence where I once saw fear." and ended his address saying, "not one man nor a thousand men can turn Birmingham aside from the path on which it is set."

Boutwell died on February 3, 1978, at the age of 73. He and Helen had three children, Helen Linder, Albert Jr, and Charles Drake. Birmingham's Boutwell Auditorium is named in his honor.