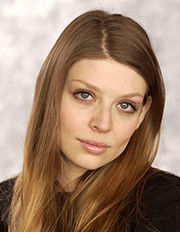 Benson was born in Birmingham to Herb and Diane Benson and began her career with dance classes and a stage debut at age 6 dancing in the Alabama Ballet production of "The Nutcracker". She fell in love with acting and appeared in several Birmingham Children's Theater performances. She moved with her family to Orlando when she was 12, and then to Los Angeles two years later so that she could pursue acting as a career.

She appeared in a television commercial for "snap.com" before landing her first film role, as the epileptic "Ella McShane" in Steven Soderbergh's 1993 film, King of the Hill. She was nominated for a "Youth in Film" award for her brief, but effective performance. She was cast in a string of minor roles through the remainder of the 1990s before winning the part of Tara, the love interest for Buffy's friend Willow on the Buffy the Vampire Slayer in 2000.

In 2001 Benson wrote, produced, directed and starred in the independent film Chance and has written scripts for stage plays produced in Los Angeles theaters. She has remained connected to her "Buffy" fan base by making convention appearances and contributing her writing talent to the show's official comic book series.

In 2003, she co-wrote and directed an online horror/adventure series for the BBC called Ghosts of Albion with Christopher Golden. The project was followed by Astray, a novella which opened the door for a series of Ghosts of Albion books and an online sequel, Embers.