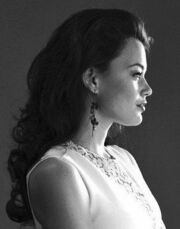 Ashley Davis (born in Dothan) is a communications strategist who reigned as Miss Alabama for 2010.

Davis attended Northview High School and then moved to Birmingham in 2007 to complete bachelor's degrees in political science and public relations, with honors, at UAB. She was Miss UAB 2009 and won the 2010 Miss Alabama competition as the reigning Miss West Central Alabama.

After her year of service, Davis worked as a public relations intern and as sales and catering coordinator for the Tutwiler Hotel. From 2012 to 2016 she worked as a brand strategy manager for Dreamland Bar-B-Que.

She married Daniel Sandlin in 2014 and moved to Knoxville, Tennessee in 2016 where she works as a senior communications strategist for the advertising agency Pyxl.