Difference between revisions of "Ashley Jones" 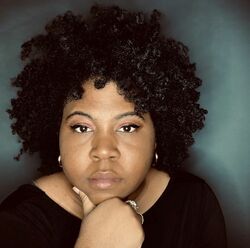 Ashley Michelle Jones (born August 13, 1990 in Birmingham) is a poet and creative writing instructor at the Alabama School of Fine Arts (ASFA) and the Poet Laureate of Alabama. She was one of six women authors honored with a Rona Jaffe Writer's Foundation Award in 2015.

Jones is the daughter of Donald Jones, assistant chief of the Birmingham Fire and Rescue Service, and his wife, Jennifer. She grew up in Roebuck and attended W. J. Christian School, EPIC Elementary School, and the Alabama School of Fine Arts, graduating in 2008. She then completed a bachelor of arts in English at UAB in 2012 and a master of fine arts in poetry from Florida International University, where she was a John S. and James L. Knight Foundation Fellow, in 2015. Her poems, which often touch on her experience of race in Birmingham and in America, have appeared in numerous periodicals and anthologies.

Jones returned to Birmingham in 2015 to join the faculty of ASFA as a creative writing instructor. A selection of poems from her collection entitled Magic City Gospel, earned her notice by the Rona Jaffe Writer's Foundation. She was presented with that national honor on September 17, 2015. In 2017 her collection dark // thing was selected for the "Lena-Miles Wever Todd Prize for Poetry" given by the University of Central Missouri's Pleiades Press.

In 2020 Jones was awarded a Poetry Fellowship from the Alabama State Council on the Arts, and presented with a 2020 Alabama Author award from the Alabama Library Association. In 2021 she joined the faculty of the Master of Fine Arts program at Converse College in Spartanburg, South Carolina. On August 22 of that year she was selected by the Alabama Writers Cooperative to be the state's first Black Poet Laureate.

Jones is an editor for PANK Magazine and a guest editor for Poetry Magazine. She is a co-founder of the Magic City Poetry Festival, and co-director of PEN Birmingham.