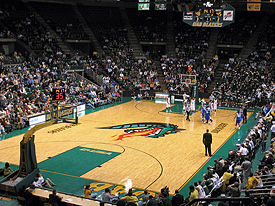 Bartow Arena (formerly UAB Arena) is an 8,508-seat multi-purpose arena located on the block between 6th and 7th Avenue South and 13th and 14th Streets on the UAB campus on Birmingham's southside. It is home to the UAB Blazers men's and women's basketball teams; and the volleyball team.

The facility was initially planned as a multi-purpose convocation center which could be used as a basketball practice arena. During construction, however, athletic director Gene Bartow decided to put it to use as a home court for all but the biggest games. The 165,000 square-foot arena was designed by Giattina Fisher Aycock and completed for $10.6 million by Huber, Hunt & Nichols in January 1988. It has 18,000 square feet of floor space on the court level with the lower seats retracted. The permanent seating capacity is 8,508.

On January 25, 1997, the arena was renamed "Bartow Arena" in honor of Bartow, who, as head coach and athletics director, built the UAB basketball program from the beginning and pushed for the construction of an on-campus arena.

In 32 seasons of competition at the arena, the Blazer men are 383-97 (.798) on their home floor. The arena is also used for UAB graduation ceremonies, concerts and other events.

On June 13, 2015 Bartow Arena hosted a World Boxing Council (WBC) World Heavyweight Title fight between the Champion and Alabama native Deontay Wilder and the challenger Eric Molina. The fight attracted a sellout crowd of 9,347 and a worldwide television audience.

A concrete sculpture of UAB's "Blaze" dragon mascot was placed outside the arena's south entrance in 2008. The original statue was replaced with a fiberglass version in 2014. It has since been removed.