Difference between revisions of "Bill Voigt" 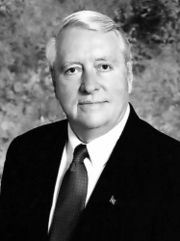 William M. Voigt (born December 21, 1938 in San Luis Obispo, California; died March 31, 2015 in Birmingham) was an officer in the Alabama Air National Guard and U.S. Air Force Reserve and president of the National Veterans Day in Birmingham organization, which coordinates the city's observance of Veterans Day.

Voigt was the son of Milton J. and Jessie Sartain Voigt. He graduated from Woodlawn High School, where he was a member of the Warblers glee club.

Voigt earned a bachelor of science in business administration at Auburn University and an MBA from UAB in 1972. He attended the School of Banking of the South at Louisiana State University and held two graduate certificates from the American Institute of Banking. He began his professional career with the First National Bank of Birmingham. He later served as executive director of the Birmingham Parking Authority and the Jefferson County Office of Senior Citizens Services. From 1970 until his death he volunteered his services as clerk for Woodlawn Baptist Church (now Liberty Park Baptist Church).

During his 35 years as a Guardsman and Reservist, Voigt graduated from the Air War College, the Industrial College of the Armed Forces, the Air Command and Staff College, and the Squadron Officer School. He retired with the rank of Colonel.

Voigt was the founding President of the UAB National Alumni Society from 1980 to 1981. He has served as president of United Cerebral Palsy of Alabama, and the Air Force Association of Alabama. He was also the national president of the American Lung Association and Positive Maturity and a member of the board of the Kiwanis Club of Birmingham. He served as chair of the Festival of Arts' 1988 Salute to Egypt and 1990 Salute to Australia.

Voigt died following a battle with cancer and Parkinson's disease in 2015. He was survived by his wife, Linda; two children, David and Diane; and three grandchildren. The William M. Voigt Student Scholarship at UAB is named in his honor.