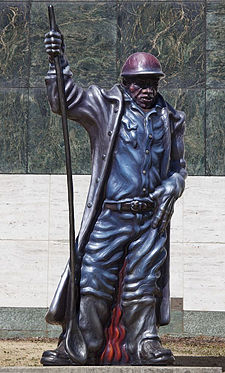 "Steelworker" by Luis Jimenez at the BMA

The museum's collection encompasses more than 25,000 objects from all periods of artistic production and in all media. Particular strengths of the collection are in decorative arts (particularly German cast-iron and Wedgwood objects) and Asian art. The museum provides year-round educational activities for the public and hosts frequent touring and special exhibitions.

The roots of the museum date back to 1908 and the founding of the Birmingham Art Club which endeavored to amass a public art collection for the benefit of the citizens of Birmingham. In 1927 they were able to display their collection in the galleries of the new Birmingham Public Library. This gallery hosted a touring exhibition of Italian Renaissance panels from the Samuel H. Kress Collection, two of which remained in Birmingham on long-term loan. Two years later, the club deposited a $19,000 bequest which was made to help fund a permanent home for the museum. Over the next two decades the club continued to add to the collection and raise support in the press and in City Hall for the concept of a new building. A 1935 bequest from Mamie Fogarty was put into trust and exploratory meetings were held by the Art Club anew beginning in 1948.

In September 1950 a governing board was created by the City of Birmingham under the leadership of Mayor Cooper Green. The new board would oversee the creation of a museum as "an institution of public service, educational and recreational, with all the people welcome." Public and private funding was applied to the venture and the following February the board hired Richard Foster Howard to serve as the first museum director.

In April 1951 the newly-established "Birmingham Museum of Art" presented a public "Opening Exhibition," housed in five unused rooms in City Hall which were provided to the club by the City Commission. The exhibition included some pieces from the existing Art Club collection as well as a large number of loaned works from museums across the Eastern half of the United States. The result was considered to be "the finest showing of great objects of art in the South to date." 1500 patrons attended the opening.

The publicity created by the exhibition led to several important gifts, notably of Chinese ceramics and textiles, Japanese prints, Old Master prints, costumes, glass and oil paintings. In 1952 the Kress Foundation presented 29 paintings from the Italian Renaissance as a long-term loan to the new museum, forming the core of the collection of European paintings. In 1954 Helen Jacob Wells left a large bequest in memory of her husband Oscar Wells to make possible the new museum building. Land was purchased the next year and, the board continued to enlarge the collection. A significant additions was the Rasmussen Collection of art from the Plains and Northwest Indians. Within a year or two a design commission for a new museum building was given to the office of Warren Knight and Davis and, in 1958 Colonel William Rushton and museum director Howard, holding a chrome-plated shovel and an ancient wooden Egyptian agricultural implement, respectively, broke ground for the new building. 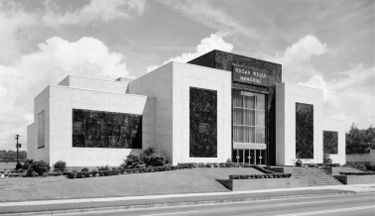 The Oscar Wells Memorial Building in 1959

The Oscar Wells Memorial Building opened to the public on May 3, 1959. A sculpture garden to the rear of the building was opened at the same time, installed by the Red Mountain Garden Club to designs by William Kessler.

In the following years the Kress Foundation made two important gifts to the museum, the trusteeship of a collection of Renaissance furniture and decorative objects in 1959, and the deed to the Italian paintings already on loan, along with 8 additional works from the same period. In October 1951, the American Cast Iron Pipe Company (ACIPCO) had reached an agreement to loan its Lamprecht Collection of Iron Art, the largest collection of German cast-iron objects in the world, to the museum. The loan was executed in 1960.

In 1963 Dr & Mrs Harold Simon began donating from their collection of Western Art and 19th Century American paintings and the next year the museum board purchased a collection of gold implements from pre-Columbian Peru.

Before the Birmingham City Council nullified the city's segregation ordinances in June 1963, the museum had reserved one day a week for African American visitors. That year also saw the inception of the "Museum Art Education Council" (Now the Birmingham Museum of Art Education Department) which began offering slideshows in art history, classes and workshops to school classrooms and to the public. 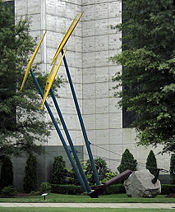 "Antelumpen" (1997) by Zachary Coffin, exhibited outside the Hugh Kaul Galleries

In 1965 a new wing of upper floor galleries was added to the building's west wing. The following year an art library was opened in the building. The MAEC instituted an "Artmobile" program to reach out to public schools in 1966.

In a 1966 report for Birmingham magazine, director Richard F. Howard noted that the museum was still growing steadily, with over 4,000 objects cared for by over 200 volunteers plus his staff of fifteen. He expressed a "desperate" need for expansion of gallery space and plans for an auditorium with a separate lobby. He further reported that the museum's site, which was selected in part because of the potential for expansion of the building, was being rapidly hemmed in by the construction of I-20/59, and the growth of the Jefferson County Welfare Department. He also indicated that it was possible that 20th Street north of Woodrow Wilson Park would be closed to traffic and that 8th Avenue North might be submerged into a tunnel to extend the park to the museum as part of the planning for the new Civic Center.

In 1967 a new East wing, called the Hugh Kaul Galleries for benefactor Hugh Kaul, was completed. The ongoing expansion of the museum had nearly exhausted its landholdings, so in 1968, with voter approval, the city issued $400,000 in bonds for the purchase of additional property, completed in 1969. In the 1970s the museum focussed on filling gaps in the collection, especially on increasing patronage of contemporary artists. At the same time the Asian art collection continued to grow into what is now the largest collection of its type in the Southeast. An Asian Art Society was established to support the collection. In 1973 R. Hugh Daniel provided an endowed directorship position. The next year another addition to the building was completed with a three-story rebuilding of the east wing, adding an auditorium and storage and office areas along with exhibition galleries. In 1978 the first gifts from the Dwight and Lucille Beeson Collection were received, creating what is now the largest such collection outside of England. In 1979 further reworking of the east wing adds a conservation lab, loading dock, and second public entrance to the building. In 1980 gallery space was expanded by 28,000 square feet, creating a total of 116,000 square feet of exhibit space, the most of any museum in the Southeast.

In the 1980s several facets of the museums operations were shored up. An endowment fund for acquisitions was created in 1980. The costume collection was enhanced by a gift from Fasion Group International while another collection of textiles from Coleman Cooper added important pieces to several museum collections. In 1984 the museum begins acquiring African artworks, now one of the most important collections in the region. A blockbuster exhibition in 1985 of the Armand Hammer Collection heralded an era of large crowd-drawing events.

In 1986 another expansion project was planned and architect Edward Larrabee Barnes was selected to oversee the designs, which were developed locally by KPS Group and expanded the museum to 180,000 square feet. Part of the program provided a new outdoor sculpture garden. $5 million was earmarked for the museum's $21 million project from a 1986 bond issue and ground was broken in 1991. Before it reopened, the museum was given a large collection of 18th century French paintings and decorative objects by Eugenia Woodward Hitt. The board also purchased a library of rare volumes on 19th century English ceramics and material culture to complement the research potential of the Beeson collection. 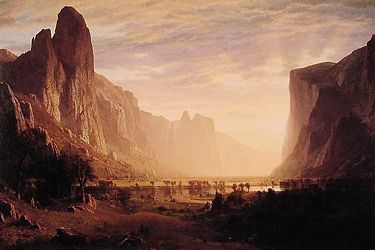 Albert Bierstadt's "Looking Down Yosemite Valley" (1865) was given to the museum by the Birmingham Public Library in 1991.

In 1993 the Birmingham Museum of Art reopened with a new multi-level sculpture garden, 50,000 square feet of new exhibition space, and a new graphic identity. A new endowment for museum operations was established in 1995 and the museum accepted an important gift of 300 Alabama-made quilts from the Cargo collection. In 1996 the museum hosted an exhibit of artifacts from the tomb of Emperor Qin, coinciding with the tourist bonanza of the 1996 Olympic Games. The year 2000 saw the gift of the William Hansell and Susan Mabry Hulsey collection and a fiftieth anniversary exhibit of Matisses from the Baltimore Museum of Art.

Over the next years the museum produced a new website and a comprehensive audio-guide to the permanent collection. The Decorative Art and Asian Art collections both received endowed curatorships and a concert series was established. Most of the galleries, including the Native American, Contemporary, Kress, American, and Korean galleries, were completely reinstalled with an inclusive arrangement of fine and decorative arts from the respective milieus of each period.

The Birmingham Museum of Art holds several series of special events and programs:

The museum hosts frequent temporary and touring exhibitions, including so-called "blockbuster" exhibits. The following were the best-attended of these: 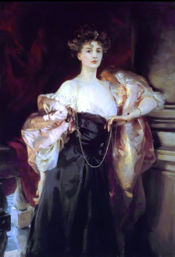 John Singer Sargent's "Portrait of Lady Helen Vincent, Viscountess D'Abernon" (1904) was acquired by the museum in 1984

Significant individual collections at the Birmingham Museum of Art include: