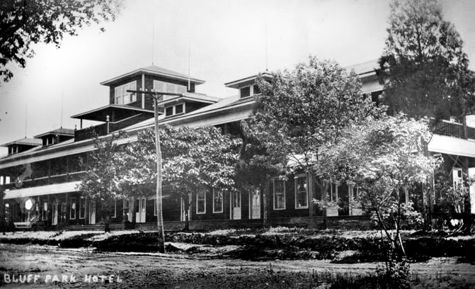 The building, constructed on a 6-acre parcel, was intended as a summer resort and opened at the beginning of June each year. The facility featured running water from the nearby springs and electric lighting. Each guest room opened onto a wide veranda and an observation tower was built onto the roof. The main dining room seated 25 guests. The kitchen was supplied with fresh vegetables from on-site gardens and lodgings were constructed for the staff.

Yates bought out his partners in 1911. He sold it to J. P. Wright in 1913. From 1914 to 1916 it was owned by the Ingram Realty Company. R. M. Ingram assumed ownership in 1915 and commissioned another renovation, including the addition of an open-air dance pavilion. Ingram's son, R. M. Ingram Jr operated the resort that summer. Special round-trip taxicab service was provided from the Hillman Hotel in downtown Birmingham for $1.00.

After World War I, Mrs F. D. Gamble operated the hotel with her family. In 1923 they closed and boarded it up. William Levi and C. P. Campbell purchased it and began renovations. It was renamed the Mountain Top Inn. Campbell bought Levi out just before the planned 1925 re-opening and a fire destroyed the building soon afterward.