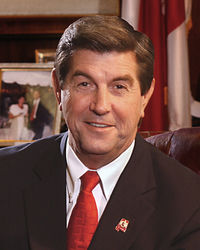 Riley was raised on his family's farm near Ashland, a small town in Clay County where his family ranched and farmed for six generations. Riley attended the University of Alabama, graduating in 1965 with a degree in business administration. He is married to the former Patsy Adams, also from Ashland. The couple has four children and four grandchildren. Riley is a member and trustee of the First Baptist Church of Ashland.

Before going into politics, Riley was a successful chicken farmer and owned a trucking company. He also worked as a car dealer, a real estate developer, grocer, and cattle rancher. He served on the Ashland City Council from 1972 to 1976, when he ran unsuccessfully for Mayor.

Riley was first elected to the U.S. House of Representatives for the 3rd Congressional District of Alabama in 1996, defeating State Senator Ted Little of Auburn and Libertarian John Sophocleus. He was re-elected in 1998 and 2000 and served as vice-chair of the Military Readiness Subcommittee of the House Armed Services Committee. In 2002 he fulfilled a self-imposed pledge to limit his congressional career to three terms and entered the race for Governor of Alabama.

Running as a Republican, Riley easily defeated Tim James and Steve Windom in the primary. He then took on the incumbent, Don Siegelman in the general election, which came down to a handful of disputed votes. A voting machine malfunction in Baldwin County indicated at first that Siegelman had won the election, but the corrected totals gave Riley the official victory. The corrections were subsequently confirmed as matching the voter sign-in sheets as well as the tapes on the machines recording the actual number of ballots cast.

In the first year of his administration, Riley proposed "Amendment One", which would have made sweeping changes to the state's tax system. The plan essentially consisted of income tax breaks for the lowest income brackets, offset by numerous tax hikes on consumers and some upper income earners. Riley presented his plan in Christian terms, arguing that the existing system was unfair to the poor. Many conservatives attacked the plan on the basis of the tax increases included in the plan. According to some analysts, the plan would have resulted in an overall tax increase of $1.2 billion per year.

While Riley's plan enjoyed liberal support, some liberals criticized the plan for giving tax breaks to large corporations, such as Alabama Power Company. The plan was rejected by voters on September 9, 2003, with 68% opposed. The proposal was actively opposed by the Alabama branch of the Christian Coalition. While studies of the plan by economists and accountants showed that a majority of Alabamians would see lower overall taxes under the plan, polls showed that a majority of Alabamians - apparently influenced by opponents' advertising - believed that their personal taxes would be raised under the plan.

While Riley's Amendment One was soundly rejected by Alabama voters, it did gain him national recognition. For his leadership in addressing the state’s fiscal crisis, Governor Riley was named the “Public Official of the Year” by Governing magazine in 2003, and Time magazine hailed him for being one of the nation’s “most courageous politicians.

Riley has claimed credit for helping to spur economic development in Alabama. He points to the opening of an aeronautics engineering facility in Mobile by EADS, the parent company of Airbus, which may ripen into an aircraft assembly plant if EADS secures future contracts.

Riley's critics have pointed out that Riley has failed to emulate the success of predecessors, such as Siegelman and Jim Folsom, Jr, who both claim credit for securing large automotive manufacturing plants. Specifically, when Kia announced in March 2006 it would build a maunfucturing plant in Georgia, Riley was criticized by Siegelman for Alabama's failure to mount a serious bid for the plant.

Under Riley's administration, unemployment in Alabama fell from 5.3% in January, 2003 when Riley took office to 3.3% in March, 2006. This rate was the lowest ever recorded since statistics began being tracked in 1976 and was among the nations lowest. Critics have claimed that recent developments are a consequence of national economic recovery and pointed to the loss of thousands of Alabama's historic textile jobs under Riley. Nevertheless, the state under Riley's administration was recognized as "State of the Year" by Southern Business and Development magazine four years in a row and received other awards for competitiveness, job creation and economic development. Among other honors, Worldwide Interactive Network named the Alabama Office of Workforce Development the No. 1 U.S. employee development agency and Expansion Management magazine has ranked Alabama Industrial Development Training No. 1 among workforce training programs.

In 2005, Governor Riley was criticized by some Mobile County residents after issuing a "mandatory" evacuation in advance of Hurricane Dennis's landfall.

On August 28, 2006, Governor Riley declared a state of emergency for the approaching Hurricane Katrina. On the same day, he requested that president George W. Bush declare "expedited major disaster declaration" for six counties of south Alabama. The request was approved by the evening of August 29. 350 national guardsmen were called on duty as of August 30.

On November 9, 2005 Riley called for a citizens' boycott of Aruba, alleging that the local government was engaged in a cover-up of the disappearance of Natalee Holloway.

In November 2005, Riley was linked to the Jack Abramoff scandal when his former Congressional press secretary, Michael Scanlon, pleaded guilty to conspiracy in the matter. It further emerged that, as a Congressman, Riley signed a letter on behalf of the U.S. Family Network, opposing expansion of casino gambling in Alabama. The U.S. Family Network was revealed to be an Abramoff front, funded by the Mississippi Band of Choctaw Indians, which operated competing casinos. Riley has denied knowing the source of this funding.

In 2003, Alabama state politics gained national attention when the chief justice of the Alabama Supreme Court, Roy Moore, refused to remove a monument of the Ten Commandments from the rotunda of the court building. Riley reportedly supported Moore, but ultimately did not play a large role in the dispute. Riley stated there was nothing he could do to prevent Moore from being removed from office by a judicial ethics panel. Moore challenged Riley in the 2006 Republican primary, but Riley easily prevailed, garnering about 2/3 of the vote.

Analysis of this increase seems to indicate that it may be attributed to the public’s perception of Riley’s response to Hurricane Katrina. By February 14, 2006, Riley's approval ratings had slightly decreased, with 52% approving and 43% disapproving of his job as governor. As of August, 2006, his approval rating is at 62% with a disapproval rating of 35%.

In August 2006, Russ and Dee Fine publicly criticized Riley's membership in the all-white Grand Lodge of Alabama, a governing body of Freemasons. The issue was explored in a widely-published Associated Press article where Riley and other Grand Lodge members denied that the group discriminates. While Grand Lodge Master, Frank Little said he knows of no blacks among its 32,000+ members statewide, he vowed in the AP article to dissolve any lodge that barred their admission.

Property tax appraisals became a major campaign issue with Riley's opponents claiming that Riley, acting through his revenue commissioner, ordered that property tax appraisals be made annually, rather than the quadrennial reappraisals that were established practice. Because property values tend to increase over time, making appraisals more frequent has the indirect effect of increasing the taxes paid by property owners. Riley's opponents claimed that by doing so, he raised taxes without a vote of either the Legislature or the people. Riley claims he is merely following the language of the law, and the advice of his attorneys.

Citing Riley's string of successes and an administration without controversy, scandal and indictment, Riley received the endorsement of every daily newspaper in Alabama. The Anniston Star commented that Riley's record is "perhaps the best of any governor in 30 years."

In the general election he defeated Lieutenant Governor Lucy Baxley to win a second term.

After leaving office, Riley embarked on a solo cross-country motorcycle trip, packing little more than a tent, fly-rod and a couple of changes of clothes. He went as far as the Arctic circle on the Dalton Highway north of Fairbanks, Alaska before losing control on the slushy, gravel road. He broke seven ribs and a collarbone and punctured his lung. After receiving treatment in Alaska he flew to Sarasota, Florida for recovery.