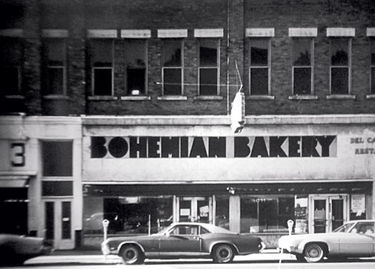 The Bohemian Bakery in the 1970s

The Bohemian Bakery & Delicatessen was a long-standing retail bakery and restaurant at 1802 (later 1804) 4th Avenue North, near 18th Street.

In the early 1910s the bakery was owned by a Mr Kahn. He briefly operated a second small lunch room on 20th Street North.

The store on 4th Avenue was remodeled in 1914 with new fixtures, and a second location was opened at 2116 2nd Avenue North. At that time the bakery was reported to consume "a car of flour" monthly in its retail-only business.

In 1940 the bakery workers, organized under the Hotel and Restaurant Workers Local No. 281 headed by Jim Key, went on strike. The owner hired replacements who passed by picket lines for several weeks. Ironically, the bakery had run an advertisement in the program for the 1939 Alabama State Federation of Labor meeting in Birmingham.

In the 1940s the business, sharing its building with Berman's Store No. 3 and the St James Hotel, was owned by Philip Randman. Among his employees were his sister and brother-in-law, Rose and Albert Warner, the parents of Birmingham Stallions owner Marvin Warner.

On April 9, 1963 during the organized Birmingham Campaign of protests against segregated downtown businesses, nine demonstrators sat down at the bakery, which only served white customers. They brought money provided to them by the movement, but were ignored by servers. They helped themselves to cakes and chips sitting on the counter. They were arrested and jailed instead of being asked to pay for the food. Two more demonstrators were arrested there on April 16.

In 1970 Inez Davis, a cook at the Bohemian Bakery, was awarded a citation from President Nixon for her volunteer service at the Help One Another Club. One of the bakery's busboys, Ona Watson, left his job to take up a career in music at Bob Cain's Cane Break supper club down the block. The bakery closed during the early 1970s.