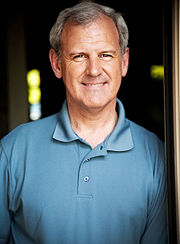 Bradley Byrne (born February 16, 1955 in Mobile) is an attorney, Chancellor of the Alabama Community College System, former State Senator, and a Republican candidate for Governor of Alabama in the 2010 primary elections.

Byrne grew up in Mobile and graduated from UMS-Wright Preparatory School. He holds a bachelor's degree in public policy and history from Duke University and a law degree from the University of Alabama School of Law. He practiced privately in Mobile for 25 years and was elected to the Alabama State Board of Education in 1994 as a Democrat and re-elected as a Republican in 1998.

In 2002 Byrne defeated incumbent Albert Lipscomb in the Alabama Senate District 32 race in Baldwin County. He served on the the Education Committee, the Education Budget Committee and the Judiciary Committee, and chaired the Joint Oversight Committee on State Parks.

After soundly defeating Republican challenger Randy McKinney in the 2006 primary, Byrne ran unopposed in the 2006 general election. He resigned in 2007 when he was appointed by the State Board of Education (with Governor Bob Riley's recommendation) to serve as Chancellor of the Alabama Community College System in the aftermath of widespread criminal corruption in the system. He resigned from that post in May 2009 to campaign for the Governor's office.

Byrne and his wife, the former Rebecca Dukes, reside in Fairhope (Baldwin County) with their four children. He is a member of St James Episcopal Church.