Difference between revisions of "Century Plaza" 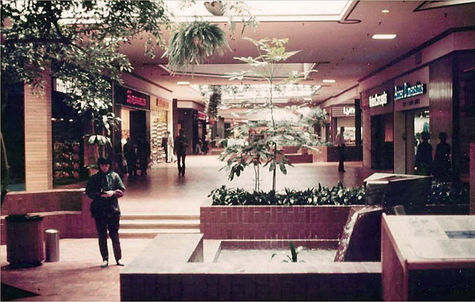 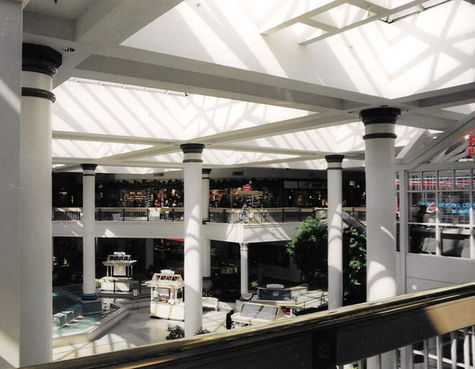 Century Plaza was a 743,785 square-foot, two level, enclosed shopping mall which opened in August 1975 on a 65-acre site at the intersection of Crestwood Boulevard and Oporto Road in the Eastwood area of Birmingham. The mall closed in 2009 and was torn down in 2020.

The mall was designed by Crawford, Giattina & Mitchell architects in a contemporary style with light brown brick on the exterior and brown tiled floors, open stairways, numerous angular fountains and bronze glass partitions on the interior. It was developed by Engel Realty Company with Marvin Engel, Jerome Leader and James R. Bennett as executives in charge.

The mall was constructed for $25 million. More than 2.4 million cubic yards of earth were excavated for the development, with much of it being used in construction of nearby interstate highways.

The Sears store was the first to be constructed, and opened on September 25, 1974. The mall's 1975 grand opening was marked by thousands of balloons filling the interior, many of them containing cash.

The mall's popularity peaked in the 1980s when it outshone the older Eastwood Mall nearby with Sears, JC Penney, Pizitz and Rich's as department store anchors. A late 1980's interior remodeling brought brighter finishes and more skylights.

In the 1990s General Growth Properties purchased the mall for $32 million. In 2006 two of the mall's anchors, JC Penney and Belk, relocated to newer shopping centers in Trussville, precipitating the mall's decline as a shopping destination. The mall itself closed on May 31, 2009. The last anchor store was Sears, which owned its section of the mall building and closed on June 14.

Since 2006 General Growth has discussed moving forward with plans for a major redevelopment of the property.

The "Crestwood-Oporto District Redevelopment Plan", commissioned from KPS Group by the City of Birmingham, envisions a transformation of Century Plaza into a mixed use open-air retail and residential center. General Growth has indicated that they support the general ideas of the master plan, but have made no specific announcements regarding their plans.

In October 2008 Birmingham mayor Larry Langford proposed having the city and Jefferson County jointly purchase the mall and convert it into a senior citizens' recreation center. In December 2008, artist Rachel Higgins organized a revolving art exhibition of approximately 20 artists' work at a space in the nearly vacant mall entitled "Everything Must Go".

An Aldi food market opened in June 2009 on an outparcel facing Crestwood Boulevard.

In 2010 General Growth entered into talks with the City of Birmingham, with the Jefferson County Sheriff's Office, and with Irondale, Homewood, Mountain Brook, and Vestavia Hills, the prospective members of a Regional Jail Authority about the possibility of converting the former mall into a county jail or a regional municipal justice center. Those talks stalled due to lack of public interest and funding.

In 2011, following the bankruptcy of General Growth Properties, the Howard Hughes Corporation of Dallas, Texas took possession of the mall property. They renewed the discussion of creating a municipal justice center. Mayor William Bell showed some interest in pursuing the project on the basis of furthering regional cooperation, but the other partners demurred.

No further proposals have been announced, though the Hughes Corporation listed the property as a "viable retail location for big box retailers" on their website. By 2014 the building was visibly deteriorating with portions of the brick veneer coming loose. The owner erected a safety barricade around the area most affected.

In early 2017 Thomas Beavers, pastor of New Rising Star Church, announced that the church was planning to relocate to the former mall, and to establish its Star Academy School charter school there.

December 2018 Lumpkin Development of Pelham purchased the property for $3 million and began redeveloping the former Sears store for his Metro Mini-Storage business.

In 2020 Stonemont Financial Group of Atlanta began seeking approvals for a "Project Magic" proposal to demolish the mall and construct a 201,475-square-foot Amazon delivery center on the site. The Birmingham City Council rezoned the parcel in July, allowing for redevelopment to proceed. Stonemont purchased the property from Lumpkin for $12 million. Demolition of the former mall began on November 12, 2020 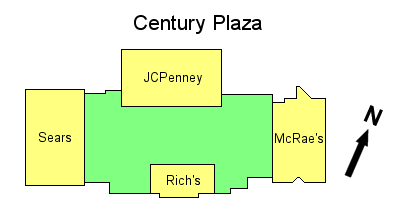