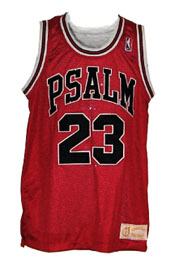 Christian Throwback Jersey is a seller of religious-themed athletic apparel founded in 2004 by Army Reserve Sgt. 1st Class Cornell Jackson and his daughter, Carrington. The company, which is based on Hidden Lake Drive in Huffman, creates team jerseys and sportswear utilizing the designs of recognizable professional sports teams, but modified so that the team or player "name" jersey number corresponds to a specific passage from the Bible. A red basketball jersey similar to Michael Jordan's Chicago Bulls uniform has "Psalm 23", for example. The designs are produced by the company and manufactured in Korea.

The jerseys are popular with Christian rap artists and are sold in Christian stores nationwide and online. They were featured as a recommended gift item in Gospel Today's 2005 Christmas issue.

On May 5, 2006 the Birmingham Steeldogs were scheduled to wear Christian Throwback Jerseys as part of a promotion sponsored by Barber Dairy and conceived by Steeldogs managing partner Scott Myers and Brent High of Nashville's Third Coast Sports, which organizes "Faith Nights" for sporting events in cities nationwide. The jerseys featured the name "Samson" on the front, with individual scripture references on the back. (Quarterback Ryan Hawk's jersey bore his usual number 12, but "Hawk" was replaced with "James" in reference to James 1:2 ("Consider it pure joy, my brothers, whenever you face trials of many kinds."). When the league threatened to fine the team for wearing unapproved uniforms, the decision was made to use the Christian Throwback Jerseys for warm-ups and post-game activities only. After the game the jerseys were sold at auction with proceeds benefitting Cornerstone Schools.