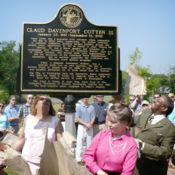 Claud Davenport Cotten, III (born January 25, 1961; died September 12, 2005) was an artist and community volunteer associated with several civic organizations in his home of Crestwood as well as in Wahouma. Cotten was a volunteer and served on the board of Birmingham AIDS Outreach, the Old Firehouse Shelter, Girls, Inc. of Central Alabama, and the Crestwood Colts youth football team. He was particularly involved with helping students at Whatley Elementary School and in the Crestwood and Wahouma youth athletics programs.

On May 12, 2007 the football field at Crestwood Park was re-dedicated as the "Claud D. Cotten, III Memorial Field". A plaque was erected by the "Claud D. Cotten Inner City Youth Fund", administered by the Community Foundation of Greater Birmingham to recognize his memory at the park.