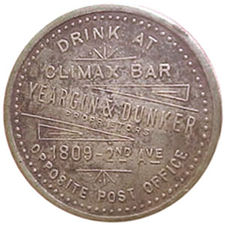 The Climax Saloon was a bar and pool hall located on 2nd Avenue North between 19th and 20th streets. Solomon Wise was the proprietor in the 1880s. It may have been operated in association with the nearby Climax Shaving Parlors.

The Climax Bar operated at 1809 2nd Avenue North, across from the Birmingham Post Office in the years before prohibition. The proprietors were named Yeargin and Dunker.