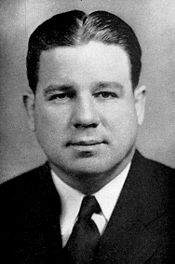 William Cooper Green (born November 18, 1900 in Birmingham, died June 29, 1980) served three terms in the Alabama Legislature, presided over the Birmingham Post Office for seven years, and served as President of the Birmingham City Commission from 1940 to 1953. After leaving the mayor's office he took an executive position at the Alabama Power Company, and, in 1965, was appointed President of the Jefferson County Commission.

Cooper Green as a 1922 graduate of BSC's law school

Green was born in Birmingham to Charles Martin Green, a developer who built a number of houses in North Birmingham and Tarrant City and also served as an Alderman in the City of North Birmingham. He grew up in the North Highlands neighborhood and attended public schools. After graduating from Jefferson County High School in Tarrant he went to work in Kentucky's oil fields for a few months.

Green returned to Birmingham in 1919 to enroll in Birmingham-Southern College where he was a star on the baseball team. In 1920 he married Hattie Lee Taylor, with whom he eventually had five children. He graduated from the School of Law in 1922 and later was elected president of the Alumni Association. He took a teaching position at Marbury High School in Autauga County and coached the football team there for a year. In 1923 he returned to Birmingham and sold sporting goods at Loveman, Joseph & Loeb's downtown store. The year after that he was hired as a salesman for Glen Iris Dairies. He also worked in real estate and as an insurance broker and took night courses in law at Southern.

Green represented Jefferson County in the 1931 Alabama Legislature, elected with the most votes among 31 at-large candidates. He represented the county in two subsequent special sessions under Governor B. F. Miller, as well, before being appointed Postmaster of Birmingham on the recommendation of then Senator Hugo Black on May 1, 1933. He served twice as president of the Alabama chapter of the National Association of Postmasters and was a member of that group's national executive committee. He resigned in February 1940 to seek election to the unexpired term of Commission President Jimmie Jones who died in office. He was the first candidate to enter the whirlwind race. In his campaign statement he pledged to continue his predecessor's policies, to expand the civil service system, and to soundly manage the city's finances.

Green took office as chief administrator of the deeply-indebted city of 267,583 two days after the special election, on February 29, 1940. In his inaugural speech he proclaimed that "During my administration, it is my high purpose to cultivate and develop a proper spirit for Birmingham. ...The city with a soul will reduce sordidness, coldness, and wretchedness to a minimum."

He was re-elected on October 13, 1941 for a full four-year term, and won subsequent re-election campaigns in 1945 and 1949, the last victory coming by a record margin. In the Summer of 1945, due to a five-week strike by members of the Birmingham Typographical Union No. 104, all three daily newspapers ceased publication and had to rely on other media for coverage of the end of World War II. Appealing to their patriotism, Green convinced the newspapers' owners to concede to the printers' demands and return to publishing.

During his 13 years in office the city reduced its debt burden from $65 to $20 per citizen and operated with a net surplus for 12 years. He oversaw the city's purchase of the Birmingham Water Works for $19.5 million, the Alabama State Fairgrounds for $290,000, and Roberts Field for $145,000, each of which increased in value under his leadership. He initiated construction of several schools, parks and recreation facilities (including Cooper Green Golf Course, which was open to African American golfers). He invested $155,000 into expansions and upgrades at Legion Field and paid off city debts on the golf courses at Highland Park and Roebuck. He supported private efforts to purchase the Arlington Antebellum Home & Gardens for the city. Perhaps his most visible achievement, though, was the construction of the new $4 million Birmingham City Hall on Linn Park, which was financed with no new tax revenues and was paid for in full by the time he left office. He also helped spur the development of the Alabama Symphony Orchesta and the Birmingham Museum of Art by giving gallery space in the new building to the Birmingham Art Association before they embarked on their own construction project.

One employee at the city's auto repair shop, Robert Chambliss, was written up and placed on 10-days leave when Green learned that he had threatened to bomb a house in May 1949.

Green cooperated with Jefferson County leaders to build new facilities for the Department of Public Welfare and the Department of Health. Four public housing projects were constructed during his term (Central City, Southtown, Marks Village, and Loveman Village) while planning for Tuxedo Court and negotiations to purchase Eastwood Housing Project for the Birmingham Housing Authority were under way at the end of his administration.

In 1949 the City of Birmingham annexed large areas of unincorporated Jefferson County, including 27,000 new residents. In all, Green's 13 years in office saw the population of the city's population grow by 20%.

Green resigned from the City Commission in April 1953, seven months before the end of his term, to become a vice president of the Alabama Power Company. The timing of the resignation allowed for candidates to step forward for the May 5 primary. At the time there were volunteers in each of Alabama's counties organizing to draft him into the campaign for Governor, though he had never publicly stated an intention to run. He was honored with a formal dinner at the Tutwiler Hotel's Terrace Ballroom on the evening of April 22.

Green was promoted to executive vice president at Alabama Power, and joined the company's board of directors. In 1959 he was appointed to serve as president of the Jefferson County Commission and in 1963 also accepted the chairmanship of Governor George Wallace's Industrial Advisory Committee.

Green also headed the Oak Hill Memorial Association which manages and operates Oak Hill Cemetery. In 1965 Green led lobbying efforts to secure construction of a new $10 million Birmingham Post Office on 24th Street. He was re-elected to the Commission in 1965 and served until retiring for health reasons in 1975. Green, who suffered from diabetes and heart problems, died in a nursing home in 1980. He was survived by five children, 10 grandchildren and 7 great-grandchildren.

Green was one-time president of the Birmingham Civitan Club and also served as treasurer to the national organization. He served for 8 years on the board of directors of the Community Chest of Birmingham, and was state grand chancellor of the Knights of Pythias. He was also a member of the Masons, Shriners, and the Tarrant Commercial Club. As Mayor he won the presidency of the United States Conference of Mayors (1949-50) and the Alabama League of Municipalities (1950-53). He served the United States Department of State in 1947-50 as an appointed representative to a commission to study post-war urban development in Europe and at celebrations of the 400th anniversary of Helsinki. The King of Norway made him a Knight of St Olaf in 1950. Green was an active member of McCoy Memorial Methodist Church.

In 1975 the three-year-old Mercy Hospital was re-named "Cooper Green Hospital" in his honor by the Alabama Legislature. In 2006 the name was amended by the Jefferson County Commission to Cooper Green Mercy Hospital.