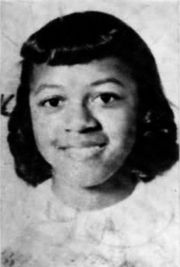 Cynthia Wesley (born Cynthia Morris April 30, 1949; died September 15, 1963 in Birmingham) was one of the four girls killed in the 1963 bombing of 16th Street Baptist Church. She was the adopted daughter of Claude A. Wesley and his wife, Gertrude, both teachers. They lived on "Dynamite HIll" in Smithfield.

Cynthia attended Ullman High School, where she excelled in reading and math and played in the band.

She is buried at a monument in Greenwood Cemetery along with fellow victims Addie Mae Collins and Carole Robertson. Denise McNair was buried elsewhere.