Difference between revisions of "Daniel Moore" 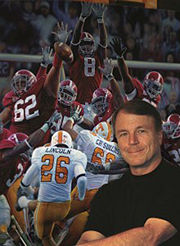 Moore took art classes all through grade school and graduated from Berry High School in 1972. He earned a bachelor's degree in commercial art and painting at the University of Alabama in 1976. His interest in the photorealistic style clashed with most of the fine arts instructors who were then devotees of abstract expressionism. After graduating he worked as a commercial artist at Martin, White and Mickwee, then Alabama Power Company; all the while selling paintings at local and regional art shows. When at Alabama Power Company he produced a painting of a runner for their company magazine. Granted the rights to the image, Moore sold reproductions through a self-financed advertisement in Runner's World, beginning his career in sports-related artwork.

In January 1979, a friend suggested he create a painting depicting Barry Krauss and the Alabama Crimson Tide defense stopping Penn State's Mike Guman short on 4th and 1 to preserve a 14-7 victory in the 1979 Sugar Bowl and a national title. Moore used his painting, "The Goal Line Stand" to create a limited edition of art prints. Selling originally for $35 each,these prints today can sell for as much as $3,000. He quickly became well-known among Alabama's fans and alumni, and for nearly two decades Alabama's athletic department gave Moore sideline passes for games, giving him the chance to soak up the atmosphere he later worked to capture on canvas.

Moore has been commissioned to commemorate numerous other athletic events and figures over the years, and his portfolio includes paintings honoring many Southeastern Conference football teams as well as images of other sports such as basketball, baseball, and golf. He has produced several book covers and limited-issue prints for special events. In 1997 Moore was selected by the United States Postal Service to create four stamp designs honoring "Legendary Football Coaches" Bear Bryant, Pop Warner, Vince Lombardi and George Halas.

In 2005 Moore was named "Sport Artist of the Year" by the American Sports Art Museum & Archives at the United States Sports Academy in Daphne (Baldwin County).

Also in 2005, the university reversed its former support for the artist and filed a suit against Moore, arguing that he should be required to pay a licensing fee to use the school's uniform designs in his commercial paintings. In November 2009 federal judge Robert Propst issued an opinion that Alabama's uniform colors could not be protected as trade marks when used in paintings intended as artistic expressions. The university appealed the decision while Moore's attorneys asked for clarification on a restriction Propst issued against his selling collectibles emblazoned with reproductions of his paintings. In June 2012, the U.S. Court of Appeals for the Eleventh Circuit ruled in favor of Moore & his company, New Life Art, Inc. stating Moore's fine artwork is fully protected by the First Amendment.

On April 27, 2019 was inducted into the Alabama Sports Hall of Fame during a ceremony at the Sheraton Birmingham Hotel.