Dreamland Bar-B-Que is a regional chain of barbecue restaurants, headquartered off West Oxmoor Road in Birmingham, with ten restaurant locations around the South.

John Bishop opened the original restaurant in 1958 in Tuscaloosa. That location has since become a culinary icon and destination for barbecue enthusiasts from across the United States. 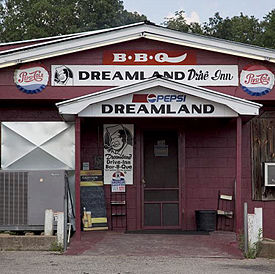 Bobby Underwood purchased the company in 1993 and opened the first Birmingham location, at Phelan Park that May. The restaurant serves the same menu of pork ribs, sauce, and white bread made famous at the Tuscaloosa location, and has added sandwiches, side dishes and desserts to the menu.

In 2010 the restaurant chain opened a new headquarters and manufacturing facility off West Oxmoor Road. The facility packs and ships Dreamland products to mail order customers and produces sauce for retail sale. It also has a large pit where barbecue is cooked for sale at football stadiums.

Betsy McAtee, Underwood's daughter, is the current CEO of the Dreamland Holding Company.