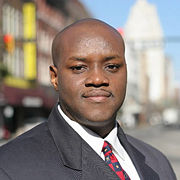 Earl Frederick Hilliard Jr (born June 16, 1969 in Montgomery) is an attorney, film-maker, and represented District 60 in the Alabama House of Representatives from 2006 to 2010.

Hilliard, the son of former U. S. Congressman Earl Hilliard, is a graduate of John Carroll Catholic High School. He has a bachelor's degree in marketing from Morehouse College in Atlanta and a law degree from Howard University in Washington D.C. He served as a lobbyist for the Alabama Historically Black College and University Consortium and was director of government relations for Morehouse, keeping offices in Atlanta and Washington D.C.

Hilliard is president of Magic City Films. He also practices law, with specialties in governmental and entertainment law, in the firm of Hilliard, Smith and Hunt. In addition to his work as an attorney and film-maker, Hilliard has served as campaign manager for his father. He is married to the former Janine Hunt and has two children.

In the 2006 primary elections, Hilliard defeated Connie Goldsby in a runoff to win the Democratic nomination for Alabama House of Representatives, District 60. He was unopposed in the general election

In 2009 Hilliard announced his candidacy for the 7th District seat in the United States House of Representatives being vacated by Artur Davis. He lost in the primary to Terri Sewell. His former legislative seat was won by Juandalynn Givan.

In the 2014 election, Hilliard challenged incumbent George Bowman to represent District 1 on the Jefferson County Commission. In his campaign he focused on repairing relations with the Jefferson County Legislative Delegation and encouraging business development in the county.