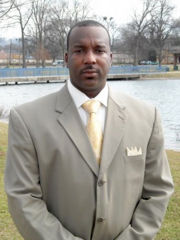 Earnest J. Lumpkin, III (born 1976) is an auditor for DataScan Techbologies, an assistant basketball coach at Parker High School and a former branch manager for the Woodlawn Branch of Regions Bank.

Lumpkin attended Oliver Elementary School and graduated in 1993 from Woodlawn High School. He completed his bachelor's degree at the University of Alabama in 1997. As a bank manager he served as treasurer for the Woodlawn Business Association.

The East Lake resident was a candidate in 2007 for the Birmingham Board of Education District 3 seat left vacant after the resignation of Mike Higginbotham. He lost that election to Howard Bayless.