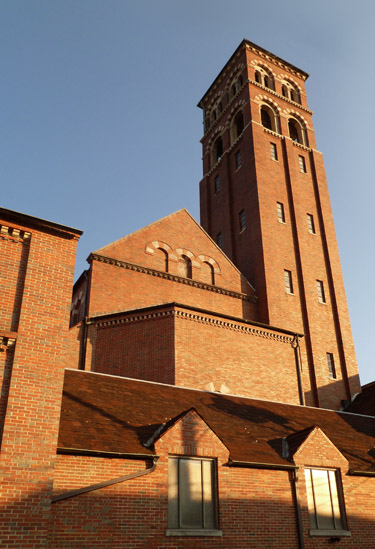 The East Lake Methodist Church was organized in 1887 by Reverend J. D. Simpson and was first housed in a small wood structure on 80th Street and Underwood Avenue. About 1893 the church built a more substantial building as well as a parsonage on the same lot. That building was damaged beyond repair in a storm in the early years of the 20th century and the congregation elected to move to a larger site at the corner of 78th Street and Hillman Avenue. The present stone church building was erected there in the years following.

The growing church almost immediately felt the need for more Sunday School rooms and added onto the remodeled temporary church building it used during construction of the main sanctuary. A brotherhood room and a new parsonage were constructed on adjacent lots about 1910.

About 1920 additional land was purchased for erection of a new "Christian Education Building". The addition, designed by architect George P. Turner was completed around 1925 for between $75,000 and $100,000.

Turner also designed the sanctuary and its tall campanile. This new church opened for worship on September 12, 1948.

Beginning in 2005 organ-builder Barry Norris began assembling the pieces for a 5,500-pipe custom-crafted pipe organ at the church. Most of the pipes are salvaged from other instruments from around the country.

A carillon of bells was installed in the church's tower in 1948. They were dedicated on February 1 of that year as a tribute to E. G. and Alice Burchfiel from her former Sunday school class. When they were first installed the bells played a call to prayer for world peace each morning at 9:00 and on weekend evenings at twilight. Special performances of Brahms' "Lullabye" were played to announce births in the neighborhood.