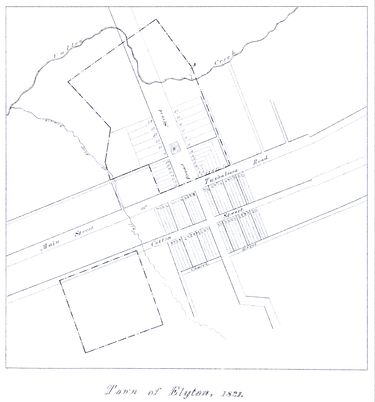 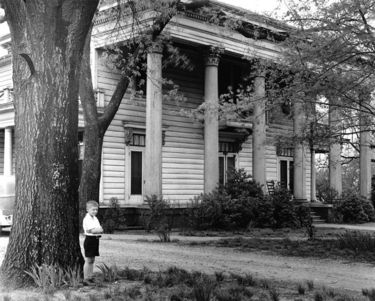 The former Earle-Greene plantation in Elyton

Elyton or Ely's Town was a prominent crossroads trading center in southwestern Jones Valley near the head of Valley Creek, and the county seat of Jefferson County from its founding in 1821 until the courthouse moved to Birmingham in 1873.

The location where Elyton developed was previously known as Frog Level, a spring-fed flatland used for horse races. A 2,560-acre parcel around Frog Level was granted by the U.S. Congress to the American Asylum for the Instruction and Education of the Deaf and Dumb in Hartford, Connecticut. Their agent, William Ely, traveled to Jones Valley to view the property. Finding it "broken, poor, and barren", and also intermittently settled by homesteaders without official deeds, he recommended that the Asylum sell it for cash. He underestimated its value on the market, thinking it would bring no more than $1.50 per acre. When the land went on sale in February 1820, prices climbed to between $15 and $100 per acre as families already living on the land bid against speculators. Ely, who had hired two guards to protect his life, proceeded to sell 27 acres around Frog Level, also known as Oldtown, to the county for 1 cent, on the condition that a courthouse and jail be constructed there within four years. Either at Ely's demand, or in appreciation for his generosity, residents of the new town named it in his honor.

The town was incorporated on by the state legislature of December 20, 1820 and by the following year boasted a population of 300 and was made the "permanent seat of justice" for Jefferson County. The Jefferson Academy was incorporated there in 1822. A number of pioneer-era coach roads crossed at Elyton, including Huntsville Road, Georgia Road, Montevallo Road, and Arkadelphia Road. The town featured a large limestone spring, forming a deep pool about 15 feet across.

Elyton was centered on Broad Street (now Center Street) where it crossed Tuscaloosa Road (also known as "Main Street") and Cotton Street, a block south. Church Street was platted another block south, running into the Stephen Hall plantation, now known as Arlington. The wood-framed Elyton Courthouse was located in the center of Broad Street, north of Main. It was rebuilt in brick in 1847. Elyton Methodist Episcopal Church, first organized on April 29, 1816, was located north of Tuscaloosa Avenue. Elyton Cemetery was developed a few blocks east of Broad.

During the Civil War, Wilson's Raiders swept through central Alabama on the way to Selma, dismantling furnaces and foundries along the way. The Hall plantation, expanded and ennobled in Greek Revival style by Judge William Mudd, served as General Edward McCook's headquarters during the burning of Elyton on March 28, 1865, and was thus spared from the torch.

Henry Hale's Elyton Herald newspaper had its origins in the Central Alabamian and Jones Valley Times, published at different times in the 1850s. His competitor, John Callahan and William Douthit's Elyton Sun debuted in 1869.

In the late 1860s Elyton was reached by the Alabama & Chattanooga Railroad running through Jones Valley and it grew to more than 700 population. During the planning of the North & South Railroad, Elyton was considered the most likely crossing, and was set to become the principal railroad connection for the mineral resources of the Birmingham District's expected industrial development. The officers of the Elyton Land Company, however, had plans for a new industrial city to be called "Birmingham", and schemed to move the crossing to a parcel of farmland they purchased from William F. Nabers and Elizabeth Nabers. In 1873 the company arranged for a referendum to move the county seat and enticed voters with free rail excursions to the polls, music and barbecue.

On March 30, 1874 Charles Walker was elected Mayor with J. B. Earle, Joseph Smith and J. B. Vann elected to the Council.

Most of Elyton's more than 1,000 townsfolk moved with the courthouse, leaving Elyton as a depopulated suburb. Plantations in the vicinity were subdivided in the 1880s. Joseph Riley Smith redeveloped his family's 600 acre farm just north of Elyton into Smithfield and initiated a horse-drawn street railway as a convenience to commuters from Birmingham and also serving the Pratt Mines.

The district continued growing as an important suburb through the early 1900s, with the emergence of West End beyond Elyton. The community was re-incorporated as a municipality in 1907. Frank W. Smith served as the only Mayor elected under that charter. The Board of Aldermen was composed of W. M. Marriner, C. M. Bitz, Ollis Brown, Van Smith, and Thomas T. Alley. Alley became the namesake of Elyton's Alley School in the Green Springs community.

The small city and neighboring areas were annexed into Birmingham as part of the Greater Birmingham legislation which took effect on January 1, 1910. The Earle-Greene plantation in Elyton was redeveloped as Elyton Village public housing project in the late 1930s. On June 5, 1936 the Elyton Civic Club joined with the Birmingham Chamber of Commerce and Birmingham Department of Parks and Recreation to stage a 124th anniversary pageant for Elyton, entitled From Oxcart to Airplane at Legion Field. The pageant was written by Olive Patton Zeigler.

The historic location of Elyton now lies within the Arlington-West End neighborhood of Birmingham's West End community. The areas commercial activity is centered on Princeton Baptist Medical Center, constructed at the intersection of Tuscaloosa Avenue and Lomb Avenue in 1922. The Elyton-West End Civic Club was founded in 1934 by descendants of Elyton's original families to "keep alive the history connected with the founding of Birmingham and to strive for its civic improvement".