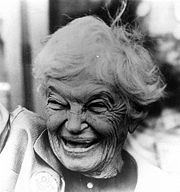 Emma Gelders Sterne (born May 13, 1894 in Birmingham; died August 29, 1971 in San Jose, California) was a notable author of historical fiction for children.

Emma took early to writing and penned plays for her and her friends to perform. She contributed to her high school and college literary magazines. She graduated from Smith College in Northampton, Massachusetts in 1916, then returned to Birmingham, applying herself to various social welfare causes. She joined the Birmingham Equal Suffrage Association and founded a school for delinquent children in 1917. She soon earned a newspaper column to cover women's interests.